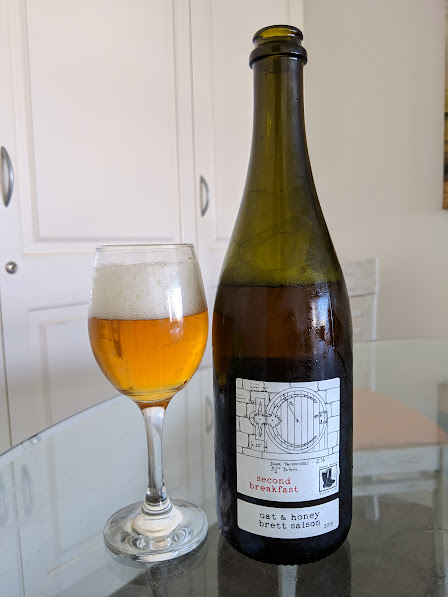 Oat and honey Bretted saison, purchased for me by Sam, I believe for my birthday this year. It's a 750ml caged and corked dark green bottle, which takes some effort to remove the cork.

Pours a lovely bright golden yellow colour, with a frothy, effervescent head of just-off-white, that stays persistent and full, leaving lovely full-throated, aggressive lace. Body is light and clear, with lots of carbonation. It's honestly a really good-looking beer.

The nose suffers from what I think now is obviously the confluence of honey and brett. It gets a really quite pointed horse character, that smells not just like a stable, but like getting really into the straw-lined corner of the stable where the horse wants to relieve itself. It's pungent, and, actually, unpleasant. But if you ignore this and look beyond it, there's pleasant notes of sweet orange and a peppery saison spice. But really, these characters are very much overwhelmed.

The taste is fortunately a lot better. There's still hints of the horsey character, but they're more integrated as a general Brettanomyces note, which gives some pleasant funk and dryness at the back. The bulk is soft, supple, spicy saison notes, which are comforting and subtle. The mouthfeel also adds a rather pleasant frothy effervescence. The finish is dry, with a whiff of the organic from the Brett.

Overall, I think this is a well-made beer, but I also feel as though the concept is itself flawed (or at least, it's a concept that's not for me). The honey notes dry the palate, but with the Brett, they lend themselves to some genuinely unwanted characters. I'm rather ambivalent as a result.
appearance: 4.5 | aroma: 2.5 | taste: 3.5 | feel: 3.75 | drinkability: 3.0
Farm Ale
4.5% Multinational Pale Ale from Bruny Island Beer Co
Overall:
62 / 100
(Decent)

Tasmanian session ale, tried on tap at the Royal Albert.

Pours a pale gold, cloudy. Head is not great because of keg froth though; quite decent retention for a thin crown and lovely sticky lacing. Looks alright; standard.

Smells slightly grainy but very mildly so, tempered by a slight fresh citric character that's quite fruity. Ultimately a bit too restrained, doesn't have much malt or other notes as the citrus drowns it out, yet that's not too robust either.

Taste is much more potent than i gave it credit for. Big fruity characters upfront with citrus - tangerine and grapefruit - that develops into a nice spicy mid-palate with loads of earthy spice taking hold late-mid and setting the scene for the finish. Pepper and grains of paradise, some coriander as well. Slightly gunpowdery and maybe leathery on the back as a result of the big peppery notes on top of the citrus hops. So yeah slightly odd but packs a punch and not a bad one at all.

Mouthfeel is quite sizzly and a little harsh. Busy, bitty; bit too much for the style.

Oh, goody. My favourite beer style with my favourite seafood added. Looking forward to this. I'm being sarcastic, by the way, on all of that. On tap at the Empire Hotel in Annandale as part of their TAS State of Brews takeover during Sydney Beer Week 2017.

Pours a pale golden colour, really opaque and cloudy. Head is white, dense with some nice lacing left behind, a litle thin and retaining well. Looks decent for the style.

Smells tart, citric and quite fresh. Different from what I was expecting. Passionfruit as well. Quite pleasant but it's not really what I expected from the description.

Taste is a bit more what I expected. Has a fleshy seafood kind of umami character early on the mid, with some meaty notes. Has some tangy notes as well, with citrus and some weird smoky character that's quite smouldery without a good substance, like it's just kind of ash residue. Maybe a slight tartness on the finish and some salty character but nothing really gosey nor particularly appealing. Look it's interesting, and probably similar to what's on the label. But not really my thing.

Decent body; good texture as it goes down. Good for the size.

On tap at Preachers.

Pours a dark brown colour, with darkness right up to the edge. Head is beige, nicely dense and creamy and retaining beautifully. Looks like a cracking stout.

Taste is largely roasty too, with a great chocolate character to it. Sweet upfront but grows with a burnt, ashy character that just becomes nice and dark and warming by the late-mid. Not hugely complex, it's quite single-minded in its bitterness but it's remarkably smooth too, and doesn't need much more. It's just a coherent, well-constructed stout. Maybe just a hint of ester by-product on the back where it gets a little lighter and maybe a touch fruity? But it works well with it all and doesn't impact on that smooth palate journey.

A little bit rough and raw on the mouthfeel, some big flavours on a fairly small malt base. But not unpleasant.

Bottle given to me by Jez for my birthday, enjoyed by myself.

Pours a very cloudy pale orange amber colour, clear until it got the little dregs on the bottom. Head is off-white, nice pillowy texture with some thin clumpy lace behind. Fed by a pretty furious bead which is perhaps a bit more than I'd want. Pretty good though.

Smells hoppy. Little sour, with citric notes, some under-ripe stonefruit, and a note of undergrowth and pepper. Touch of earthy malt, is there rye in this? Possibly just crystal. Bit spicy maybe and could use more freshness, but nice mix otherwise.

Taste definitely has a spicy malt character from front to back, then hops come through; citric and stonefruity but develops an odd soapy character on the back which may be the fruity hops mixing with yeast sediment. Bit of a floral note and a decent bitterness that's clean and somewhat fresh. Decent palate really, but the finish just has that odd chemical soapy note which is an unfortunate finish for a tangy and chewy IPA profile.

Decent body, but really dries up on the back, a bit sharp maybe. 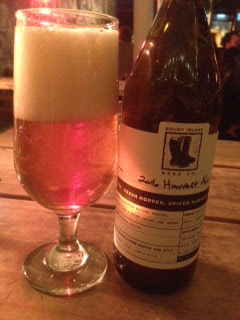