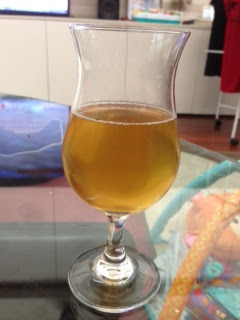 Taste is kind of weird. Fairly sour note but a strange savoury flavour upfront as well. Some salty notes and a touch umami. Gets some sour fruity notes late mid with a hint of banana, paw paw and mostly just underripe apple. Finishes pleasantly with a clipping of the flavour bourgeoning, just turning a touch crisp and tart to finish. Hint of dry white pepper late, too.

A little thin, and lots of texture. Feels a bit raw by the end.

Drinks alright, but doesn't have enough freshness throughout the main palate so the off notes just dictate play. The crisp finish is satisfying but more of that particular tartness would go a long way throughout.
appearance: 2.5 | aroma: 3.5 | taste: 3.5 | feel: 3.0 | drinkability: 3.5
Propolis Erthe (15/14)
5.25% Saison from Propolis Brewing
Overall:
68 / 100
(Solid)
750ml capped, corked and wax-sealed bottle purchased from K&L Wine Merchants in Redwood City, CA.

Pours a vibrant golden colour, with exceptional clarity. Head fizzes up in a mild white crest, but settles out to nothingness, leaving what looks like a glass of still, aged botrytis semillon. Still, looks pretty decent, and I love the clarity.

Smell is very nice. Mild tartness is softened by some noticeable wood characters, and enlivened by the herbal additions. I certainly get some sage, and I would say something sharper like tarragon, but that's not what the bottle tells me. Some mild hints perhaps of oxidation, turning slightly metallic and flat, but with the number of ways this was sealed, I'm not sure that's what it is.

Taste is rather unexpected, because it's really very flat. It's really very dry and rather thin in the mouth which means the characters have to scream to be heard. But they're there, and they're quite pleasant. Mild tartness zings with a little lemon sherbet flavour, and the herbal notes give a slightly brusque bitterness on the back, almost turning medicinal, but hooked to a pleasant earthy quality. Finish is savoury more than anything, as the herbal notes persist while the tartness and the body in general have dropped away.

Overall, it's a nice drop, but it lacks the depth and complexity of a really good saison. I like the herbal additions though, and to be honest, they're what provide most of the interest in the beer. It's pretty decent in the end.
appearance: 3.75 | aroma: 4.0 | taste: 3.5 | feel: 3.5 | drinkability: 4.0