Ah, it's not every day you get to try a new style of beer, and this is my first outing with a Brut IPA. Let's see if it warrants its own category. 330ml can purchased from Slowbeer.

Pours a very clear, deep golden colour, with a fairly frothy white head that bubbled out fairly quickly, leaving a gauzy ring around the outside of the glass. Carbonation is fine, and fairly languid. Minimal lacing. Looks decent enough. It looks not dissimilar to an Australian lager, to be honest, but that's almost certainly what they're going for.

Nose is very pleasant, with lot of sweet, fragrant fruit characters. I get some sweet citrus and stonefruit along with a surprising amount of toffee. But there's a sharpness to it too. It starts as a kind of herbal undertone, with hints of clipped grass and weed, but it morphs into more of that yeasty champagne character. It's certainly interesting, and to be honest, it's an aroma I like a lot in a beer.

Taste is... disappointing. I suspect that this is always where this style of beer is going to struggle. I was expecting the dryness (which is admittedly there), but the lack of body just lets everything fall on the ground—there's very little flavour at all towards the back. It starts out rather pleasantly, with suggestions of that sweet stonefruit and maybe a touch of ripe pineapple on the front, and just when you're ready for the next wave: nothing. Even a more pronounced bitterness to finish it off would probably help.

Feel is fine—I can imagine this beer crisper and with more lingering bitterness being very good with a mouthfeel like this.

As I said, this is my first example of the style, so I can really compare it to anything else. Right now, it feels a little bit like an IPL that's just not done very well. If the lack of anything after the front of the palate is intended, then, well, they've nailed it. But for me, it's really lacking something on the back.
appearance: 3.75 | aroma: 4.0 | taste: 3.25 | feel: 3.5 | drinkability: 3.5
JSP - Johnny Smoked Porter
5.2% Smoked Beer from Wolf of the Willows
Overall:
78 / 100
(Excellent) 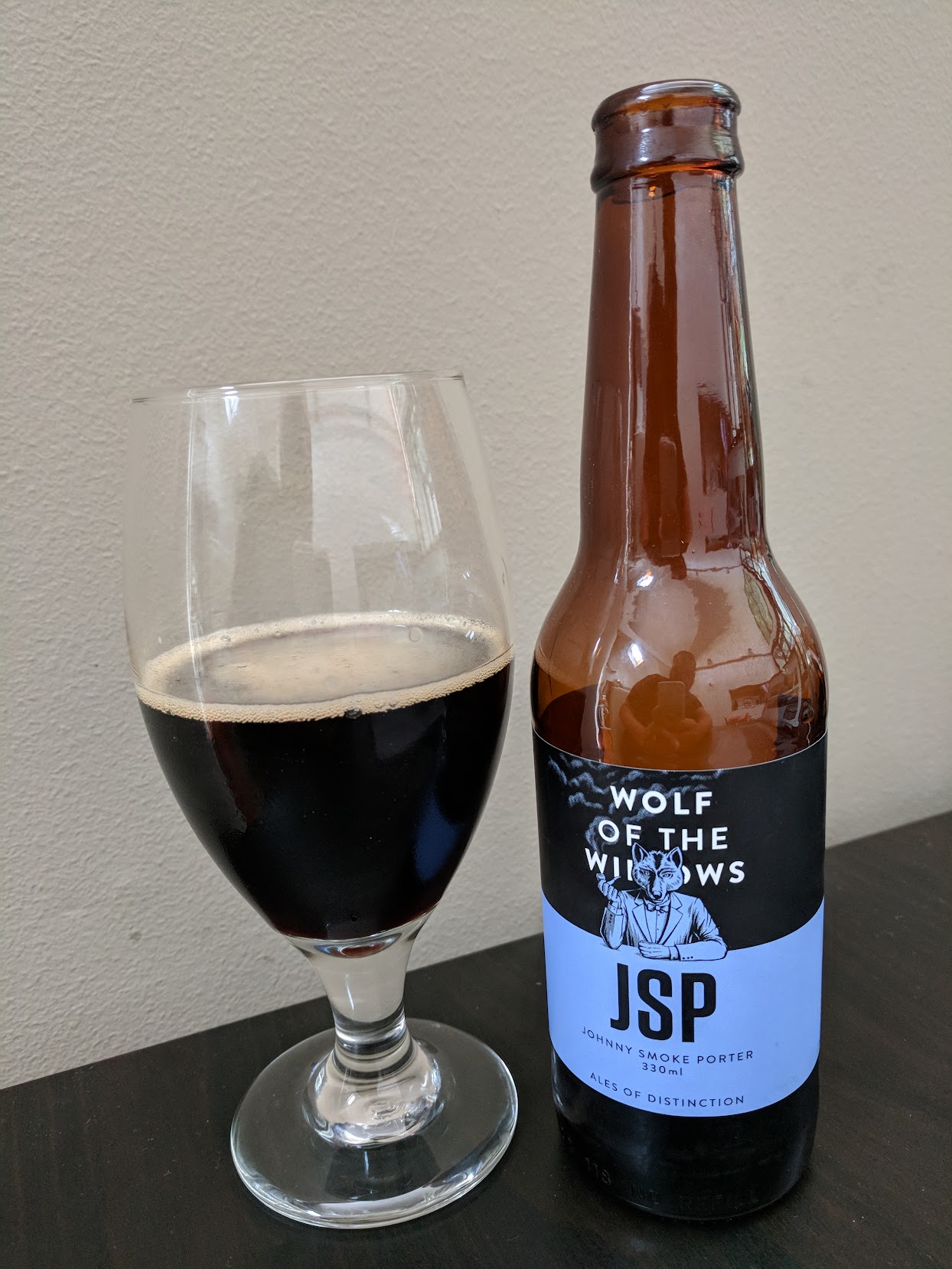 Pours a deep brownish ebony, perfect for this 35 degree day we're having today, with a thin head of beige that survives as a very fine ring. Carbonation is also fine, rising through a silky slick body. Lacing forms as thin, sudsy streaks. Looks pretty decent all up.

Nose is very pleasant. Lovely dark toasty character with elements of chestnuts and roasted almonds. Atop this is a pleasant hint of smoke, autumnal and comforting. As it warms, it releases some other notes of dark fruits: winter berries and blood plums. Very nice.

Taste is smooth and slick—really very nice indeed. There's a lovely firm roast bitterness running through the centre of the palate, but it's fastened all around with elements of complexity. More dark fruits, subtle woodsmoke and even a slight savoury character giving a stocky aftertaste. It's really good.

Feel is slick and silky, with perhaps just slightly too much carbonation tingle.

On tap at the Woolpack Hotel in Redfern for their Victorian State of Brews takeover during Sydney Beer Week 2017.

Smells pretty good. Hops are subtler than one would expect, with some sweet peach and apricot on there. Some saisony funk afterwards with a hint of rubber, some honey and really floral notes as well. Not as much of a punch as it could have had, but nice.

Taste is decent; has that dry and long, lingering barnyard rubbery flavour that's characteristic of throwing a potent saison yeast in a beer without necessarily the other flavours being constructed around it. Some, again, too subtle hop notes, with some overripe stonefruit and maybe some floral character. Barnyard and grassy funk towards the back and that organic rubber note continues on throughout. Decent drinking but not quite balanced enough and feels a bit dour.

Decent feel; nice body with a bit of texture as it goes down. Lingering dryness at the back. Pretty good. 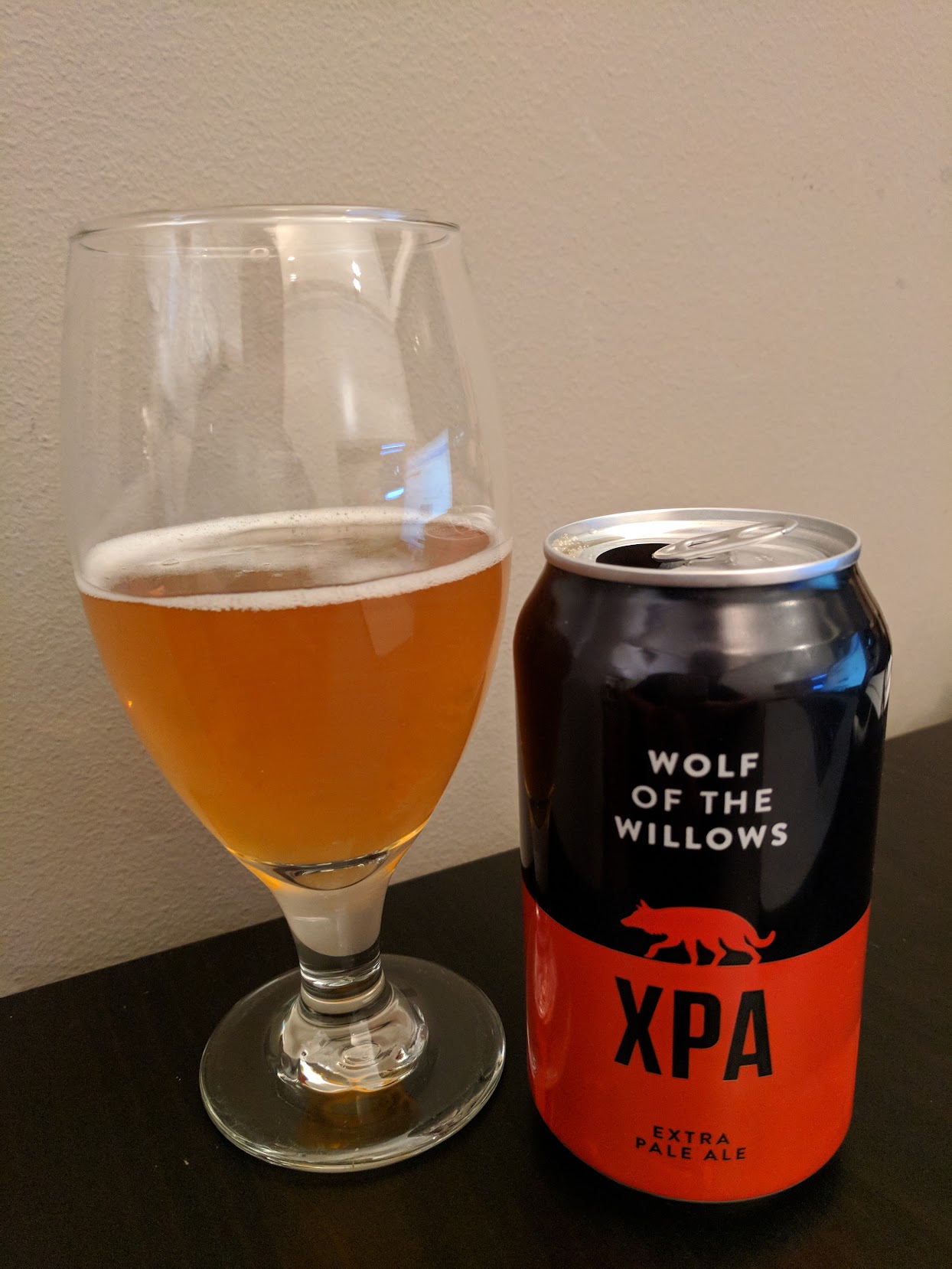 355ml can purchased for me by Sam as part of the 2017 #fletchvent advent calendar.

Pours a pleasant pale golden colour, brilliantly clear, with a fine white head that sticks around as a firm ring and some film across the top. Carbonation is relatively fine, but swift. There's also not a lot of it. Looks pretty decent all the same.

Nose is lovely. Nice bright hoppiness complemented with a light, but relatively firm malt presence that gives off a little honey. Hops are all sweet citrus, with a touch of floral aroma to them. It's a nice smelling beer.

Taste is much lighter, and the malt here is more prominent. Firm structure of semi-savoury, almost cracker biscuit grain through the centre of the palate, with breaths of hops on the front and back. At the start, it's bright and sharp, with a slight grassiness, but on the back it dips into a deep marmalade sweetness, which is unexpected but very pleasant.

Feel is a bit too light, and weirdly it has a strong hit of carbonation, which I can feel but not see.

Smells sugary, like grated palm sugar really. Vanilla and a touch of coconut maybe from some oaking? Some dark fruit and yeah, rum characters going along with the sugary character. A bit sweet and a bit subtle too in terms of its complexities.

Tastes like raisins, all over that. Some nice chocolatey malt character behind it, with some light spice characters that come through midway, including cinnamon and maybe a touch of coriander. Finish is a bit lacklustre, instead of going big and ballsy with the oak it ends up a bit sugary and insipid, sadly.

Good texture for the style, some warming alcohol notes towards the back.

Big coffee on the nose. Cake battery malt, with a spicy roasty edge, touch of cinnmamon. Yeah coffee is dominant with a bit of a spike but there's nice creamy sweetness around the edge as well.

Body is sadly a little thin, but not really to its great detriment. Hint of warming alcohol.

Yeah, I expected nothing from this beer, and got quite a lot. Good porter and good use of coffee.