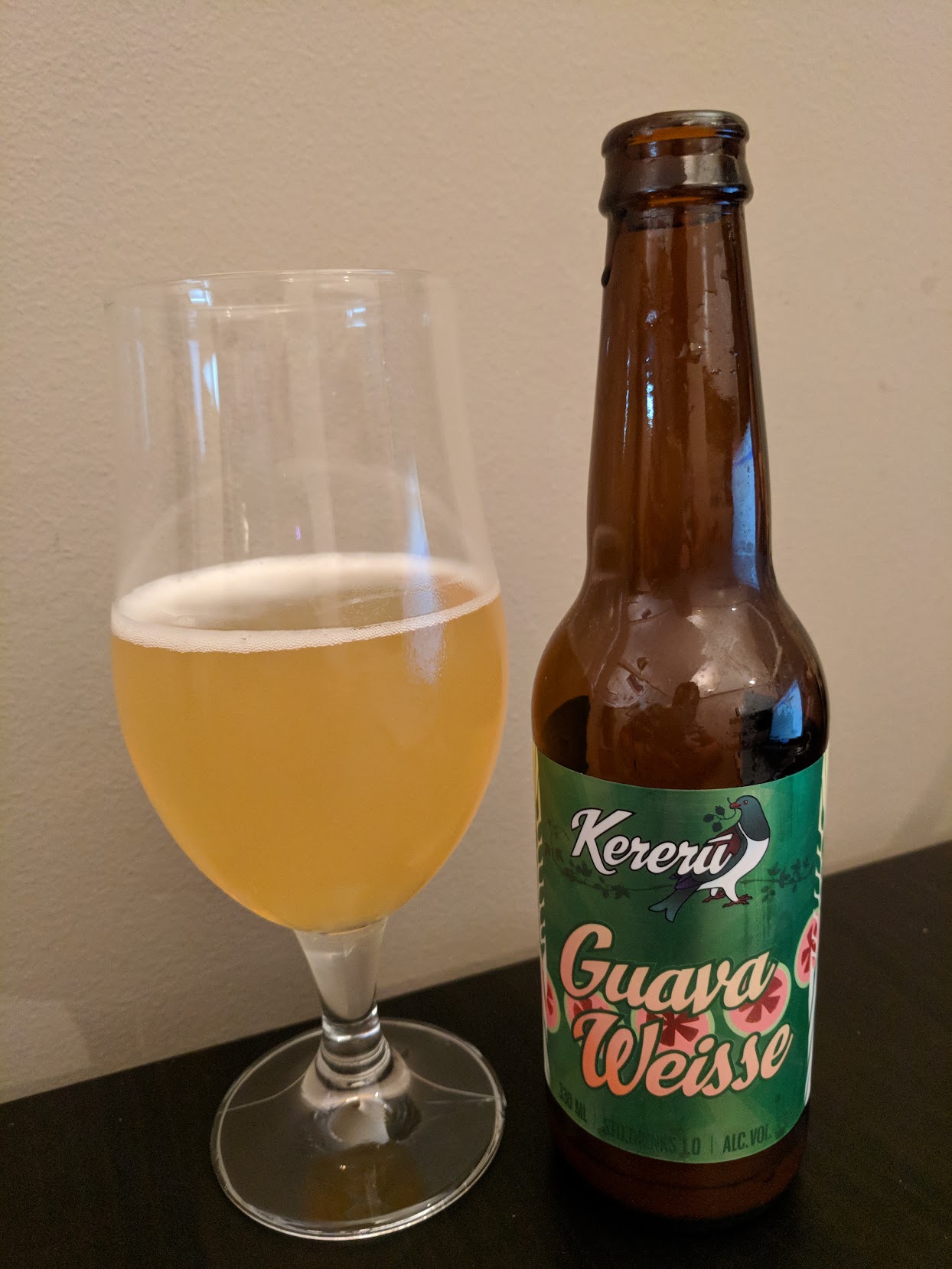 Pours a very, very pale yellow colour, with minimal carbonation, attested by the wimpy fzzt as it's uncapped. Head forms a mild crest of white to begin with but dissipates to the thinnest of rings. Body is very light, but also kind of dead.

Nose is pleasant—bright and crisp and tart, with a hint of the plasticky acidity I associate with Lambics. It has tart fruit coming through as well, like unripe kiwifruit and gooseberry (ed: yes, and guava). There's a faint chalkiness, and a hint of raw wheat, but they're undertones to the main event, which is very pleasant.

Taste is a bit of a miss for me. It has that corporeal, organic yeasty note I get from Berliner Weisses—off and clinging like drinking the water that coalesces in the bottom of a garbage bag. The tartness towards the back tries valiantly to clean it out, with some notes of feijoa and celery, but it really fails to hide the off character to me.

Feel is thin, with some sharpness from the acidity, but definitely lacking carbonation.

Yeah, this is not a winner from me. The tartness is underdone, and leaves it in a kind of unpleasant limbo where it can't quite escape the other off characters that come with being a sour beer. I'm not a fan.
appearance: 3.0 | aroma: 4.0 | taste: 2.25 | feel: 3.0 | drinkability: 2.5
Farmhouse Pale Ale
6.0% Saison from Kereru Brewing
Overall:
63 / 100
(Solid)
Bottle purchased from Platinum Liquor.

Smells slightly fruity, earthy. Touch of funk. Hint of vanilla. Bit of metal, bit of earth. Not bad but a bit simple.

Taste is farmhousey; bit of malt on the front, with a crescendoing farmhouse note, quite spicy and earthy with a fair metallic whack on the late-mid, cleans up a bit but lingers with a fair funky earthiness. Not a bad saison, but a bit strong without a lot of those lighter shades of flavour that I tend to like in this style.

Fuzzy, slightly tingly feel, with a fairly solid viscous body. Not bad at all.

Gose brewed with seaweed, apparently. On tap at the Keg & Brew.

Pours a pale yellow, slight greenish tinge. Head is flat, largely because it was poured by the barstaff at the Keg & Brew. Just whispy white notes of bubbles on the top. Not bad for the style.

Smells salty and savoury. Nice citric lemon note to it as well, with a touch of candied orange peel as well. But yeah, salty and maybe a hint smokey. Fairly nice, really.

Taste is not bad, but a little blander than the nose promised. Slight wheaty character upfront, grainy but gets very thin and empty late-mid with a very faint spice note. Savoury character midway, that tastes a little like fried batter; salty yet rich. Not a whole lot on the finish, just lingering trails of mildly sour notes, citric and some plain empty weizen notes. I shouldn't complain, as it's palatable and refreshing but it's also really quite bland.

Nice burst of texture upfront; good body, touch of carbonation fizz, then back is somewhat flat but smooth. Not bad.

Pours a dark coffee colour, dark to the edges. Head is beige, fairly sparse webs that don't stick around much. Good colour but looks a bit flat otherwise.

Smells spicy, sweet, roasty and good. Caramel edge to the malt at first then gets some rich chocolate notes and some sweet espresso character as well. Hint of bitter roast. Pleasant.

Taste is sweet upfront, with more caramel notes and a hint of vanilla. Develops some dark bitterness towards the back, espresso notes and a fair roastiness. Hint of some tart fruit behind it but it gets fairly smothered in the bitterness on the back. Decent characters.

Maybe a touch sharp from the booze but there's a good body so it flows fairly nicely without much of a rough edge.