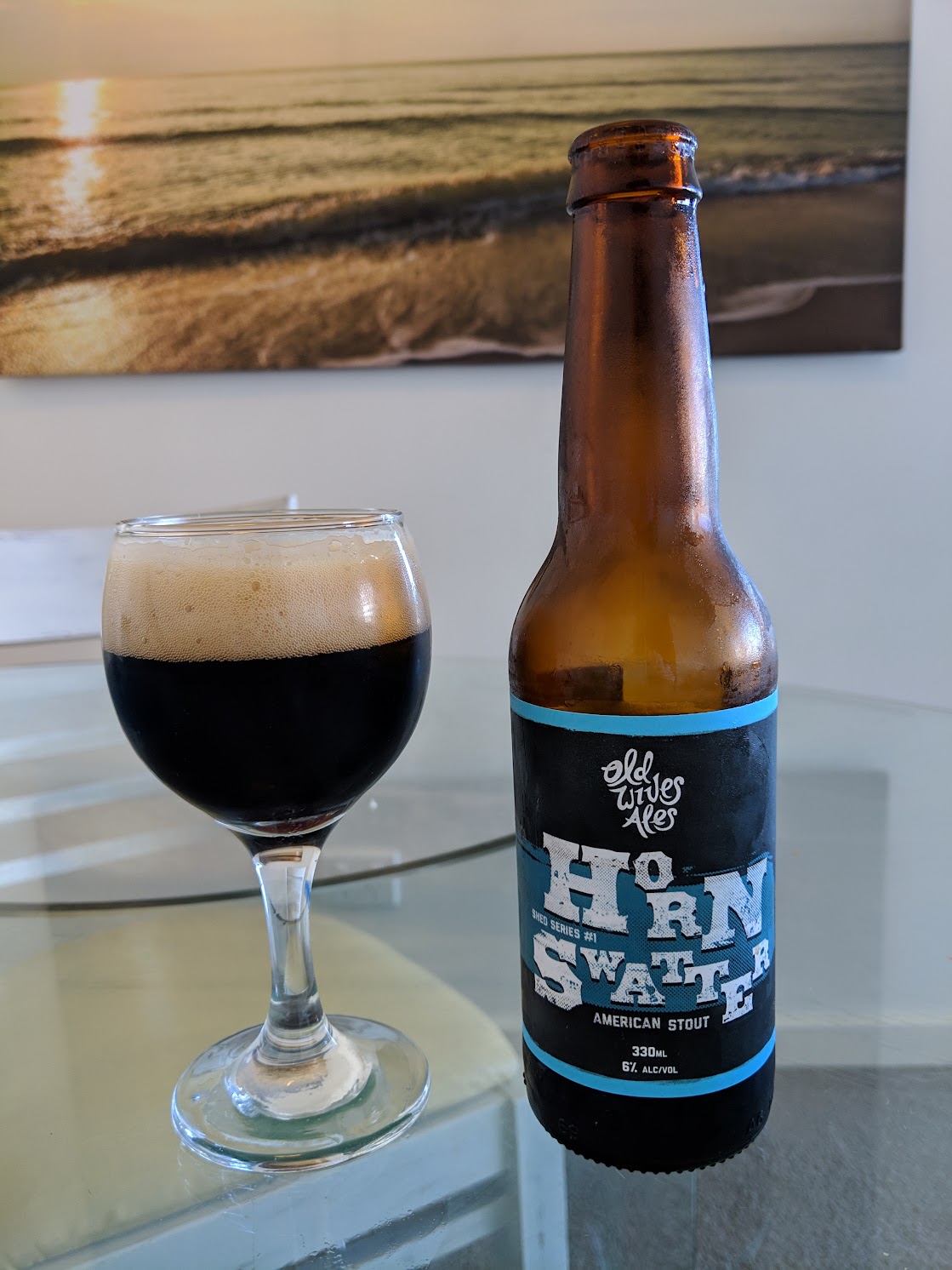 Pours a pleasant opaque ebony colour, with a full, frothy, substantial head of beige that leaves excellent lace. Head persists as a pockmarked mass. Body is fine, but a little light, holding swift, powdery carbonation. Looks pretty good all up.

Nose is very pleasant. It has a lovely toasted nuttiness to it, with a fairly strong almond note. It has an overall sweetness to it which the roast doesn't quite quell, although there's a hint of sage and smokiness which subtle sit behind the other characters, and suggest an element of balance. It's nice all up.

Taste is solid, but not as well crafted or balanced as I thought it might be. It starts well, with a toasty burnt toffee character, but this drops out and leaves a hole in the middle of the palate. Rushing in to fill the void is a slight vanilla note, and a pronounced roast bitterness, that leaves a little ashy residue in the finish. The lightness is in some ways good, but I think the bitter character could be tempered, because it has nothing to cushion it by the time it comes in.

Feel is smooth and clean, but with a lightness on the back.

On tap at the Woolpack Hotel for the Victorian State of Brews event.

Pours a dark blood orange colour, somewhat cloudy. Head is off-white, pale yellow, really, with small bubbles, nice and pillowy on the top. Looks really pretty nice. Carb-tapped but great density on the head as if it was cask-conditioned.

Taste is a bit of a disappointment. Has a big citrus/fruity palate especially on the mid, but it's quite complex without necessarily any coherency that might bring refreshment. Quite tannic on the back which again feels like Earl Grey but not enough of the sweet citrus. Slightly dull but bitter note with a kind of woody cardboard character, some black tea, and yeah the malt isn't quite enough to cover it. Just a light toffee character that dissipates by early-mid. Not amazing.

A little bit fizzy, maybe a bit thin on the body ultimately. I think in this case a cask would certainly give this the right body for the beer.

Smells sweet, mostly, with a big vanilla character to it. Some spice esters coming through, with coriander and star anise mainly. Weird smoky, savoury character as well which is a bit odd.

Taste is pretty much what you'd expect; more's the pity. Big sweetness with a medicinal edge, caramel and vanilla and a slight cocoa edge. Some spice characters late-mid and quite phenolic on the back. Touch of saltiness as well which just seems incoherent in this hot boozey palate. Lots of complexity but there's no real common thread tying it down and it feels quite confused.

Full body but with a sharp stab of alcohol towards the back; not great. 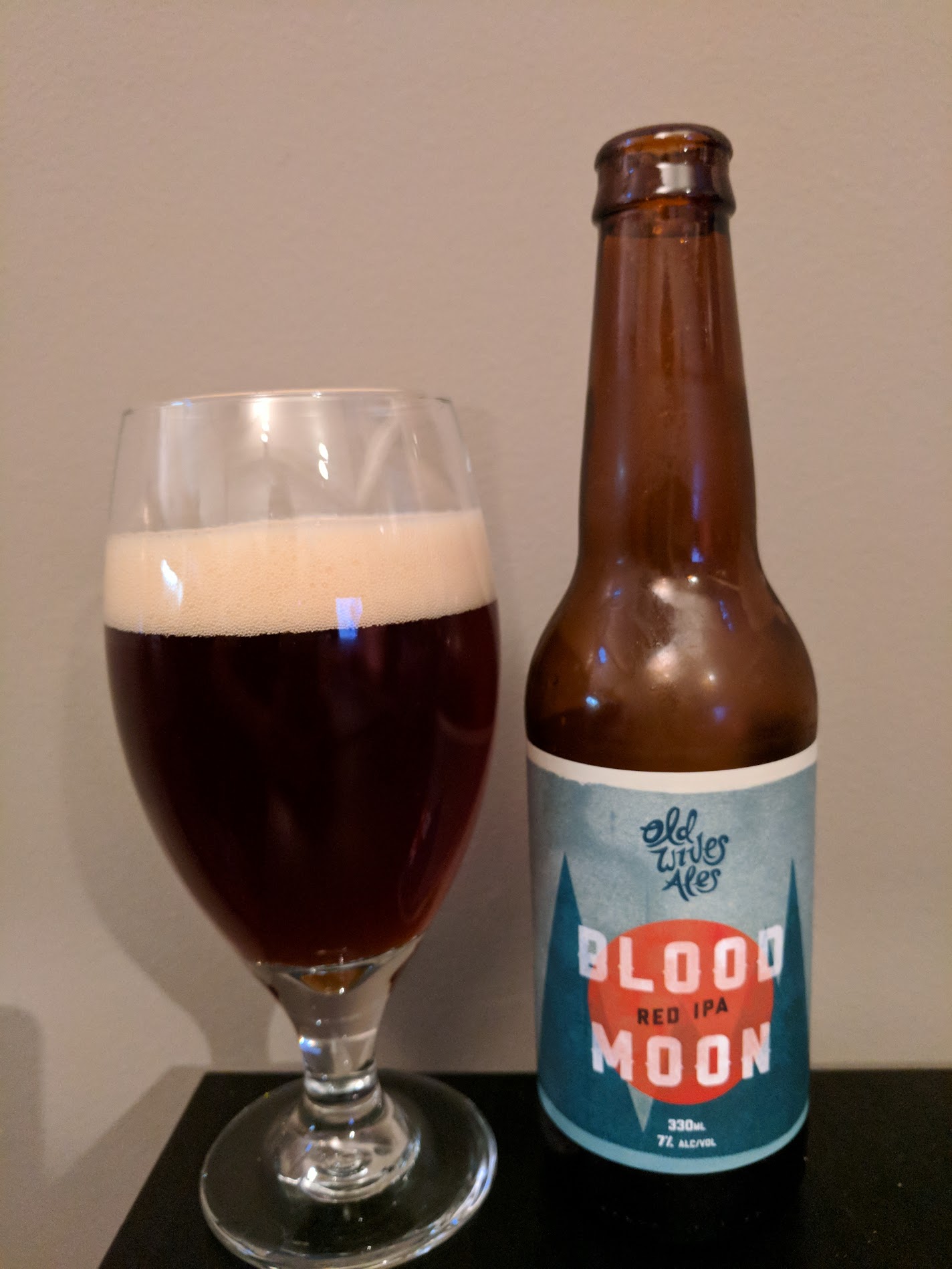 Pours really beautifully. More than anything, it's a wonderful vivid, dense red colour, with good clarity. Body is slick and fine. Head is a fine crest of off-white that leaves some sheeting lace. Carbonation is fine and swift. It looks really good.

Nose is a little flat. There's a rich, grainy sweetness, like brown sugar sprinkled over weetbix, but it's lacking a brighter note, something from the hops to give it sharpness and balance. This is too sweet and one-dimensional.

Taste is pretty similar. It's all built around the malt, which is pleasant enough, but it has more of a character like a Irish Red Ale than anything with "IPA" in the name. It's savoury and dry, though there's a lightness at the back that would at least work well with more hop character.

Feel is slick and a little bit thin. Carbonation is tempered at least.

Pours a gold colour, hugely cloudy to the point where light doesn't really penetrate. Head is cream, consisting of large bubbles but not really sticking around. Looks fine.

Smells malty, with a buttery caramel kind of sweetness and a heavy coffee note as well. Not a lot of hop, but that's fine, I'll give it a pass.

Tastes a bit disappointing as it's just all coffee. Grainy-sweet upfront, with caramel and oatmeal notes, and then coffee just takes over with a sweet-spicy blend that develops a fair roasty bitterness on the back. There may be some subtle hopping but I certainly don't get a lot of character from the hops at all. Not bad but not enough IPA for me.

Decent mouthfeel, the texture is quite nice.