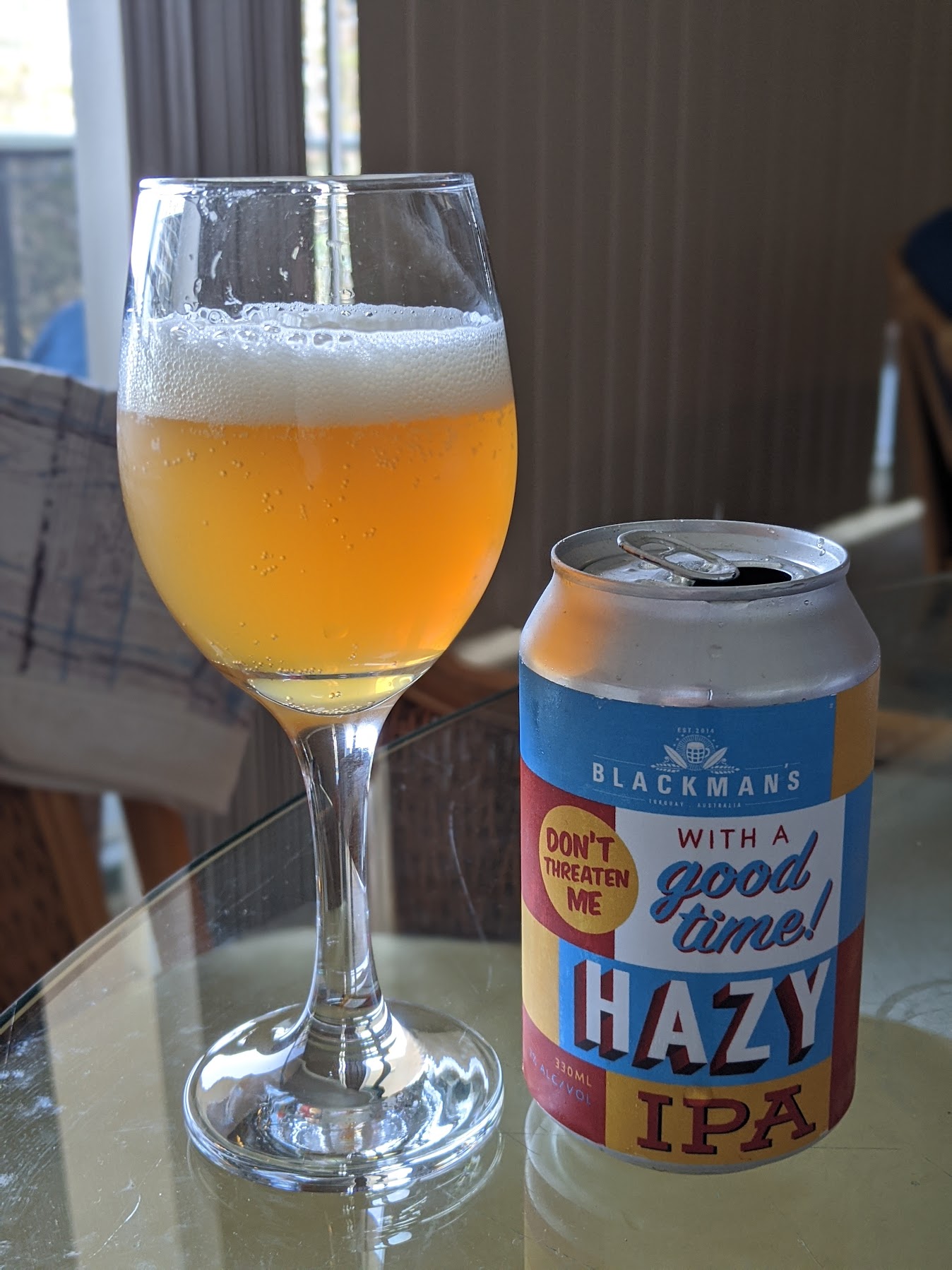 330ml can purchased for me by Sam for Xmas.

Pours a nicely orange golden colour, with a moderate amount of hazing. Head is a fine sheen of filmy white that leaves complex lace. Carbonation is fine, and the body looks like it's got enough weight to support it. Looks very suitable.

Nose is reasonably good, but not as potent as the best examples of the style. There's a fairly strong fruit component—almost like an amalgam of mango and berries, but there's also a brusque earthy hop presence as well—as though the oils are not the only thing working here.

Taste is a bit more staid. It has a softness to the body, and a roundness that would help accentuate the fruitiness if there were more there in general. But it has a bitterness towards the back that almost feels brusque and metallic. Weight is quite light though. You don't feel at all like this is 7% ABV.

Pours a darkish brown colour; fair enough for the espresso but a funny-lookin' kolsch. Head is beige, a little whispy but good crown retaining.

Taste is roasty from start to finish, with a big wave of espresso character in the middle. Some cinnamon character late-mid and the coffee notes that are good and spicy and full of character turn a bit sweet late. Not bad.

A kolsch?? Decent brew with nice coffee character, but it seems weird to call this a kolsch, given how it's come out. It may be brewed kolsch-style (whatever that is though, I mean, really... you can just put ale and lager yeasts in with a hail mary and say hey presto, a kolsch) but it's poor expectation-management given how thick and dark this is.
appearance: 3.5 | aroma: 3.5 | taste: 3.5 | feel: 3.25 | drinkability: 3.75
Arthur Smoked Porter
6.0% American Porter from Blackman's Brewery
Overall:
64 / 100
(Solid) 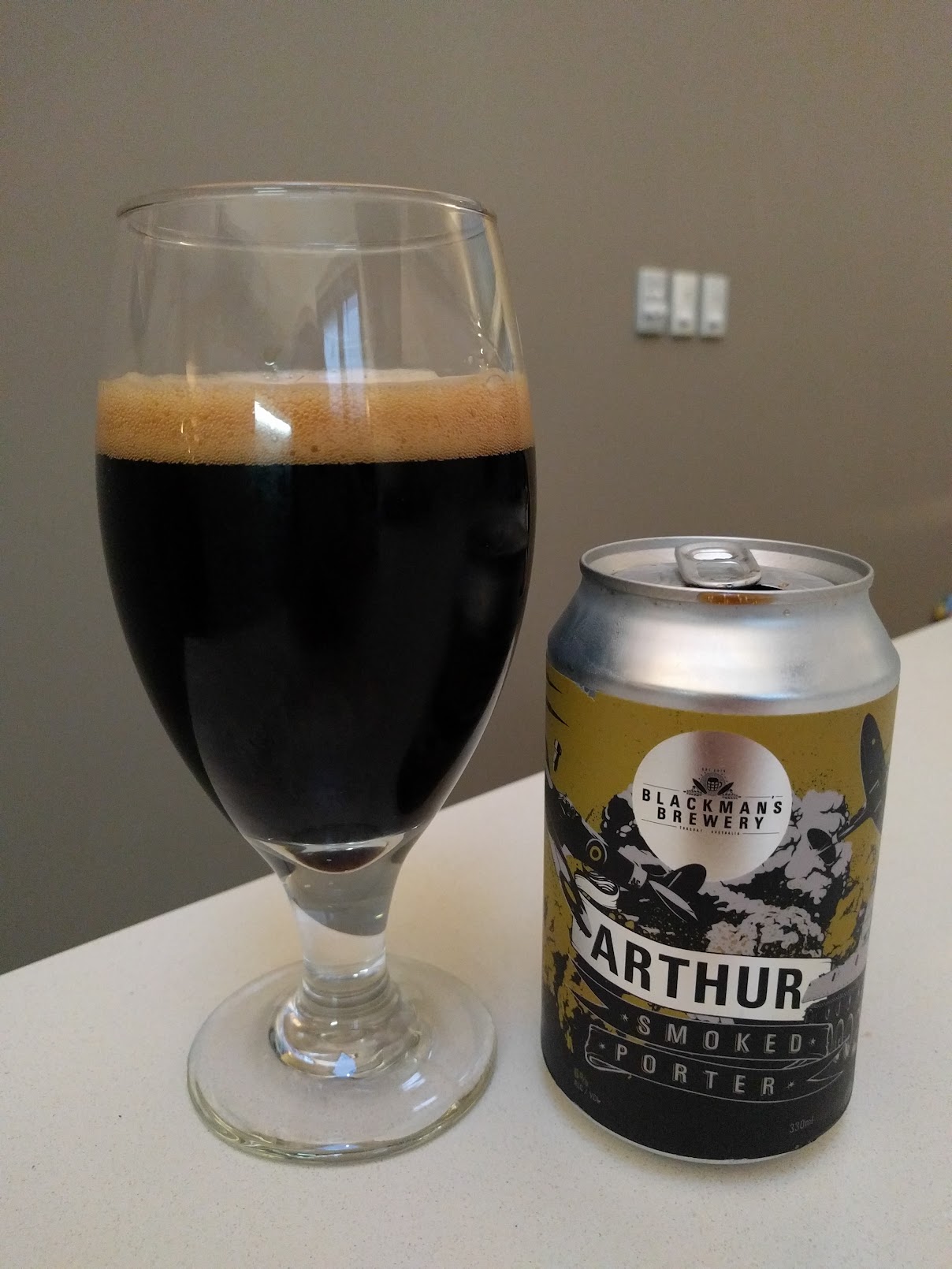 330ml can purchased from Slowbeer.

Pours a murky, but deep brown colour, with a fine, insubstantial head of beige, that leaves pleasant, intricate lacing. Body is fairly light, leaving swift, fine trails of carbonation as it moves around. Looks decent enough.

Nose is quite pleasant. The smoke is subtle, and woven nicely into the malt backdrop. This is fairly broad and rich, giving toasty bread and dark chocolate. There's a sweetness to it, but it's well-integrated into the other flavours. The overall impression is of toast cooked over a campfire, drizzled with a little honey. It's nice.

Taste is also pretty good. There's a lightness on the back, which would be to the detriment of the flavour in most beers: but here there's a firm malt structure that persists throughout. Otherwise, there's a light, slightly sweetened smoke note on the front, and a slightly dull metallic note in the finish, which is the only character that's really out of place. Mostly, it's pretty good.

Feel is fairly light—a richer feel would help it, but it's not bad as it is.

Overall. I'm pretty happy with this. It's not a world-changing beer, but it's handily made and there are some nice characters to it. It hopefully forms part of a fairly solid core range.
appearance: 3.5 | aroma: 3.75 | taste: 3.5 | feel: 3.5 | drinkability: 3.5
Snake Bite
5.8% English India Pale Ale (IPA) from Blackman's Brewery
Overall:
65 / 100
(Solid)
An attempt to recreate an English 'Snake Bite' cider/lager cocktail but with an IPA in place of lager. And all in the one package. Brewed for GABS 2016. Tried there on tap.

Smells hugely of apple. Nice citrus characters on there as well to round it off. Lemon with a hint of lime, some vague tropical notes and some honey sweetness as well. Pleasant.

Mostly sweet on the palate. Caramel notes upfront, then develops some fruity hop character, with apple along for good measure. Mango maybe, some lemon zest and all quite tangy. Not very bitter, so I feel it's lacking in the IPA stakes, but otherwise it's a decent construction of a sort of beer-cider hybrid, in a beer.

Body is a little thin too for the style, and there's a bit of sharpness on the back as a result.