On tap at the Royal Albert. Now for some reason I had this notable uneasiness about the concept of a "black IPL"; like I was an early adopter of the idea of "Black IPAs" when everybody was decrying the illogical style naming so there's no reason for this uneasiness when you just switch it to a lager-style. But then I realised in entering this that the reason is that a style for this doesn't exist. Like, it should really be its own style like black IPA is distinct from IPA, but there just aren't enough of these around. As far as I know, there's one and this is it.

Dark chocolate brown colour, beige head. Small tightly packed bubbles with some decent lacing to it. Colour reminds me a bit of a schwarzbier, which is good. Otherwise standard.

Smells hoppy, mostly; a fair amount of citrus that's a little too pungent maybe. Some slight roasty malt that takes on a slight flaxy and chemical aroma with those citrus notes. Some sweeter tang giving passionfruit is subtle but there; probably a bit too subtle as it could freshen up the whole thing a bit.

Tastes decent, and better than I expected. Has a very schwarzy character because it's quite light bodied, and the roasty malts are fairly thin and light too without any astringency or char character. The hops are also there but welcomely subtle, with just a mild lemony wash over the top; bit of a grapefruit bitter hang to the back which is a slightly duff note but otherwise not too bad. Drinks like a hoppy schwarz and that's a pretty good thing. Especially as I tend to find schwarzes lacking in bite for me.*
*. Note to all the schwarz defenders: yes I'm AWARE THEY'RE NOT MEANT TO HAVE BITE. Doesn't mean they're good or interesting. Seriously, I'm so sick of the same arguments from schwarzbier fans, even imaginary ones. Y'all are the same and so predictable.

Mouthfeel is a little dry with a strong pull from the hops and the roast so it puckers a little, unfortunately. Thin as expected.

Drinks decently; has a fair amount of character but without going overboard and ends up delivering something that can happily be called a lager despite how much the style doesn't make a whole lot of sense. Worth noting as well that Beer Farm do one of my favourite IPLs so perhaps unsurprising that a black version would also be in my favour.
appearance: 3.75 | aroma: 3.25 | taste: 3.75 | feel: 3.0 | drinkability: 3.5
Milk Stout
6.2% Milk / Sweet Stout from Beer Farm
Overall:
68 / 100
(Solid)

On tap at Old Faithful Bar & BBQ in Perth.

Pours a dark, murky reddish brown. Head is beige, nice and foamy but sinks to a thin crown. Bit of wobble and the lacing is immaculate. Looks great.

Smells pretty great too. Nice caramelised vanilla flavour with a good milky aroma to it, but a very pleasant underlying roast that just grounds it slightly without dominating. Ends up smelling like good rich dark chocolate. Bittersweet and nice.

Taste is not quite as good. Starts out alright with big rich chocolate notes but they don't really spread and fill the palate, rather they thin out a bit so the mid-palate is a little sour and somewhat weak. Finish improves a bit; gets more roasty dry notes with a touch of burnt coffee, still has a lingering lacto sweetness though so it takes any oomph out of it. In the end it's a bit too sweet to be an impressive stout but not sweet enough to be a full on dessert beer.

Mouthfeel is decently full and quite smooth; slight dry tingle as it goes down; actually really pleasant texture. 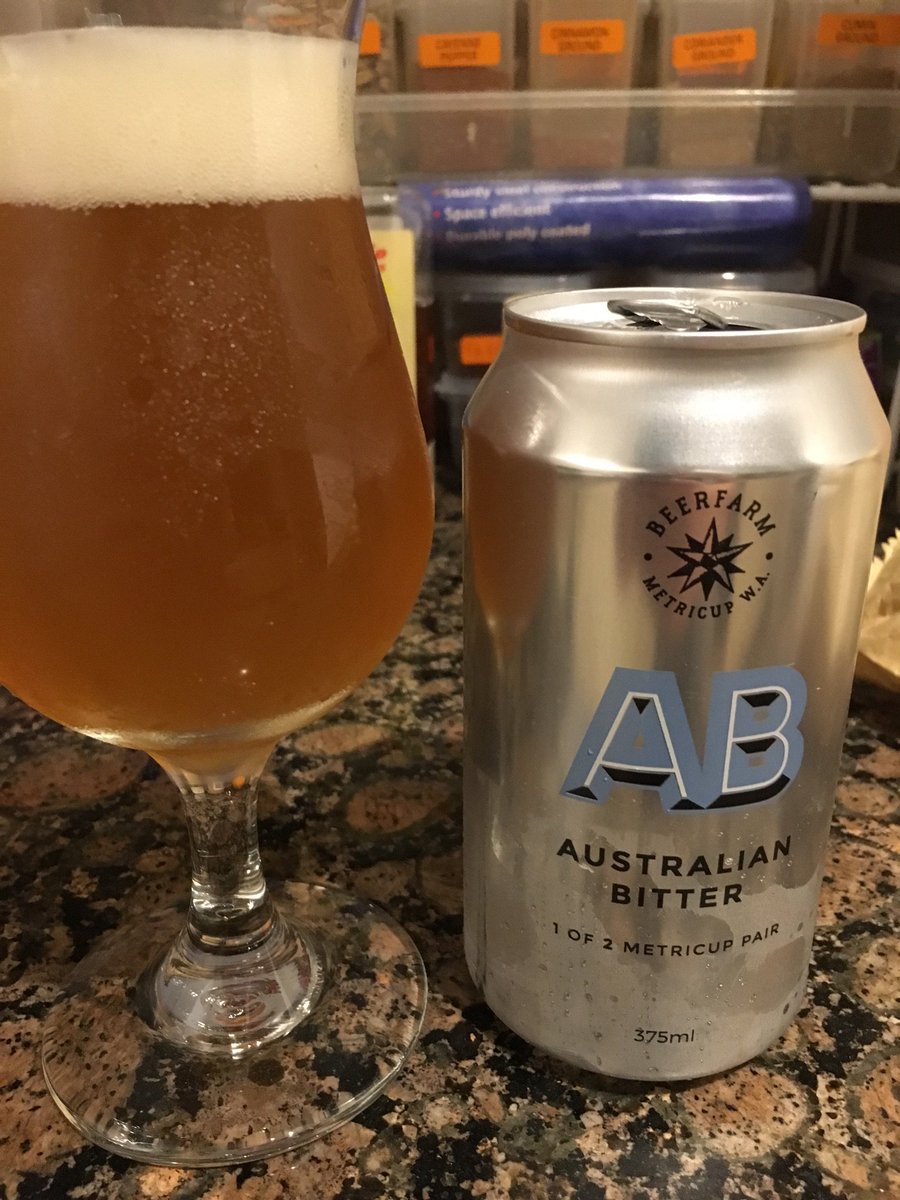 Day 11 of #fletchmas Advent Calendar 2017. Obviously classifying it as an English bitter, because Australian bitter isn't a thing, unless this beer makes it so. Spoiler: it won't.

Jeez I caught a whiff of those hops as soon as I opened the can. Pours a pale gold colour, mild haze and steady population of bead through the body. Head is white, foamy with visible bubbling at the top. Lacing could be stickier but is decent. Looks decent.

Smells, yeah, hoppy. Primarily US west coast character with a big pongy lemon character, maybe some Mosaic as well as it gives me kind of a sweet orange character as well, and a hint of some tropical NZ hop character as well. Very faint malt backbone, but it's there. Not sweet, but like a good spent grain mash tun. Wet, grainy. It's all very pleasant and nicely constructed.

Taste is actually mildly disappointing, but I'm thinking it's just a fragrant pale ale now whereas my mind went IPA straight away on smelling, so just readjusting my mindset. Yeah, big fragrant citrus upfront that kind of dissipates midway, with a slight chemical soda water kind of bitterness through the mid-palate, then some muted grapefruit notes on the back with a touch of metallic character as well. Definitely spent grain notes too, and in the sense of it being bland and a bit wet and sodden like all the malts have been wrung clean from it; it's quite bland in terms of malt base, and the hops are just not that vibrant and feel strangely suppressed.

Mouthfeel is a little thin, too; some sharp hop pull towards the back that keeps me from wanting to savour it in favour of slamming it down - is that a good thing? If it's intentional I guess so.

But regardless, the flavour isn't quite balanced enough to be a full quencher. The hops, the malt all just feel a bit muffled and bland, but it's clearly meant to taste fresh and drinkable. It's not bad in this sense either but it's just not that great.
Late edit: makes perfect sense when I find out what this is. I feel the hops are too fragrant for the style as they give a different impression while drinking. I also suspect there's some PoR in the hop bill, which is not a bad thing but it explains why it feels a bit muted.
appearance: 3.75 | aroma: 4.0 | taste: 3.25 | feel: 3.25 | drinkability: 3.5
West Coast Lager
4.6% Munich Helles Lager from Beer Farm
Overall:
54 / 100
(OK)

Pours a golden colour with slow bead. Head is off-white , decent bubbling that peters out to a thin spit cloud but leaves some nice foamy lacing behind. Decent lager.

Smells grainy, with sweet puffed rice and oatmeal on there. Some light fruity and floral hops with a touch of lemon, apricot and other stone fruit. Banana as well, all maybe a touch sweet and could use some more cutting with a sharper fragrance. Appealing though.

Taste is fairly grainy, all over. Quite sweet upfront with a caramel malt flavour, hint of honey and brown sugar. Gets grainy midway with some barley and a touch of semolina in there, maybe slightly wheaty. Subtle grassy noble hops late-mid, just twist the flavour gently bitter and could maybe be emphasised a bit more, as the back is a little corny-sweet and gluggy because the hops aren't quite cutting enough. Ultimately alright but a bit sweet and stodgy.

Fizzy from the carbs but the body is quite sticky. Could use more drying or cutting from something other than the bubbles.

Smells great. Spicy, hoppy with a slight murky darkness to the malt. Savoury even. Really pleasant but not a huge barrel character at this stage.

Taste is a bit subdued too. Oak comes through strongly here, woody and slightly fruity, with a big French kind of earthy complexity. Hops become secondary as a result though, which is a shame because they were already a bit too subtle. Decent malt base, decent palate construction but yeah it becomes one-note for the oak effectively.

Smells great too. Hops are strong but so, too is slightly roasted malt with a touch of chocolate. This and fruit conbined give a nice sweet, but refreshing aroma. Doesn't quite pop but really appealing.

Taste is quite malty, with amber malt notes, caramel and nice barley. Hops are prominent with lemon and grapefruit character. Slightly roasty on the back. Tasty, again doesn't quite pop, I think the hops are good at bittering but could add some really intriguing contrast earlier. Nice but not amazing.

Taste is refreshing and pleasant. Slight grain body with a bit of fizz early mid. Hops take over - not quite as pungent as the aroma, with some subtler tropical notes and a touch of clean citric bitterness on the back. Finishes clean, slightly fizzy too. Really pleasant clean drop, refreshing but interesting too.

Maybe a touch too much fizz but it's not sharp, it just foams up and feels a little bloated.

Great drinking lager. Pleasant and refreshing. We need so many more of this type of beer on the market. And far fewer goses. But that's a different story.

On tap at the Royal Albert Hotel.

Pours a pale gold, cloudy with a big sediment cloud. Head was good when poured, but Jez had this first and then swapped it. Decent lacing but the retention is nice and dense too. Pretty good.

Smells like detergent. Touch of barnyard but a big sharp "chemical clean" sort of smell. Sharp and somewhat unpleasant, it just has the wrong parts of its two main elements.

Tastes like what it promises, and better than it smells. Big sweet orange notes with a candied orange peel kind of flavour, notes of chemical clean-fresh, and then some barnyard notes on the back, somewhat earthy with a touch of lucerne for more freshness. Fairly clean, and fairly odd. But not bad.

Good substance, good body. Little raw on the very back but well structured.