Beer number 6 in my 2016 Advent Calendar from the Beer Crate. Reviewed blind.

Pours a pale yellow colour, fairly cloudy. Head is white, bubbly, pretty tiny and tightly packed with a good half a finger retaining. Some decent lacing left behind. Looks pretty nice for a pils, or something even more intriguing (like something that doesn’t look what it is!!)

Smells fruity and pleasant; some decent stonefruit characters that bend slightly towards the tropical – maybe peach and apricot with some passionfruit in there as well. Slight earthy, phenolic character as well as some slightly sour wheat malt. Pretty nice blend of fruit, spice and earth.

Taste is very fruity upfront, gets a nice late-hop note with bags of tropical flavour; some pineapple, peach and nectarine that lingers towards the back. Some slight bitter notes, hint of medicinal phenols and maybe a whisper of barnyard late-mid that develops into a slightly soggy bitterness that isn’t so heavy that it becomes dank or unpleasant. In the end it dries up a little like a shredded wheat biscuit, just a hint of spice ester and a hint of yeast that is a little clingy but not cloying. Really quite pleasant, summery drop with a good cleansing balance to it.

Mouthfeel is good; well-textured with plenty of substance to an overall light, drinkable body. Touch of carbonation tingle but not too rough.

Yeah, I’m enjoying this; crisp and palatable but with plenty going on on the palate. Enough sense not to go overboard while still packing a punch.
Later edit after finding out what it is: it's a little lacking in saison character although it's there. I enjoy it a lot but it could definitely amp up the barnyard notes a fair bit to make it even greater.
appearance: 3.75 | aroma: 4.0 | taste: 4.0 | feel: 4.25 | drinkability: 3.75
Hoppy Saison
5.6% Saison from Five Barrel Brewing
Overall:
54 / 100
(OK) 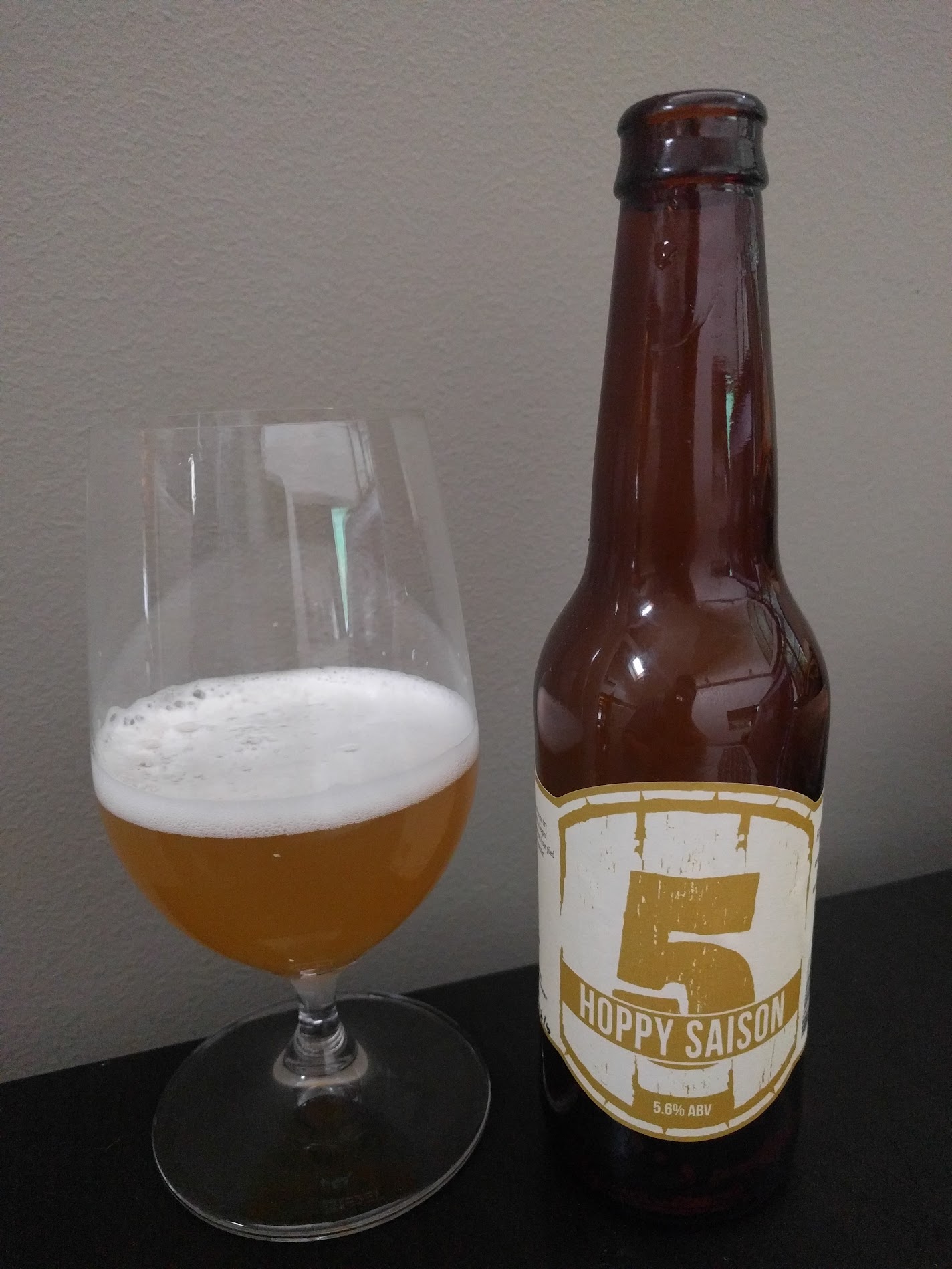 Purchased as part of the Beer Crate 2016 Advent Calendar. This was #6. Bottling date of 15th October 2016, about two months old. Reviewed blind.

Pours a slightly hazed light golden colour with a voluminous, foamy head of white that leaves chunky lace. Body is light, but holds some pleasant, fine carbonation. All up, it's a pretty good-looking beer.

Nose is fairly clean, with a faint, slightly floral hoppiness that turns more green and vegetative over time. It has a sharpness to it which is quite pleasant though. As it warms, the grain becomes a bit more prominent, giving a slight wholemeal bread and flour note, which is a little less enticing.

Taste is okay. There's a thinness through the centre, but no concomitant bite from hops, so it feels flat and dead rather than clean and crisp. Flavour is grain-based towards the back, almost heading towards a bread-yeast wet unpleasantness in the finish. It doesn't quite get there though and in manages to scrape out the back of the palate to make it feel fairly clean. But it's a bit lacklustre, if not actually bad.

Feel is weirdly broad, with a fine carbonation. It's okay, but it would be better with a bit of hop sharpness as well.

Overall, I'm actually not much of a fan. There are things in here that suggest something better than it is, but it seems to fail in a bunch of important ways, and the end result is something that's fairly unappealing.

(Note: There is no way in hell I was guessing this style blind. It has almost zero saison characters to it whatsoever, and the hops are really very minimal for something calling itself "hoppy". I probably would have been even harsher in my ratings had I known what it was supposed to be.)
appearance: 4.0 | aroma: 3.5 | taste: 3.0 | feel: 3.25 | drinkability: 3.0