On tap at Jack Greene at Salamanca Wharf. I had retired from reviewing for the night but my boss insisted on me reviewing this for some reason.

Smells tangy and pleasant. Mandarin, lemon and a touch of grapefruit. Mostly tangy, touch of zest and bitterness. Not too bad. At all. Pretty nice in fact.

Taste is fairly straightforward. Malt upfront, slightly toffeed. Hops take hold early mid with citrus predominating. Lemon, some grapefruit, but never goes fully bitter. Quite tangy on the back and even quite light, with hops providing zest but no particular bitterness. Actually quite fruity on the back which might seem lacking but it's quite pleasant and refreshing, with a strong hop presence without the bitterness.

Decent body, a bit of pull on the back. Not bad.

Bottle tried at the Henry Jones in Hobart.

Bit too dark, I mean it pours a golden colour, quite rich and deep. Steady bead around the edges; head is non-existent except as the remnants of the bead. Bit of cloud maybe which is the only weizeny character. Quite bad.

Smells fruity, beery. Notes of pear, maybe some banana, some citrus and spice. Slight mineral character midway too, which is maybe a bit accidental. But not unpleasant.

Taste is light and fruity upfront; some banana for sure, that devolves maybe into notes of pink lady apple and pear, some mild spice notes late-mid with cinnamon and vanilla. Finishes a bit tart, with a little spike of a weird citrus note that tastes and feels a bit incongruous. Not the classic characters, in fact a bit off but it could have been nasty and it's somehow not. It's just tart, with a good earthy spice that saves it all.

Tingly, that gets sizzly if you savour it. Not great.

Pours a brown colour, mild haze. Head is cream-coloured, large bubbles, retaining OK. Not bad; standard for the style and the head is nothing special.

Smells like red licorice. Tangy, a little spicy and predominantly sweet. Notes of chestnut and cereal grain, some caramel to the malt as well. Maybe a bit medicinal, but I personally like it a lot.

Taste is similar. Vanilla and caramel malts upfront with a nice hint of roastiness that goes well with the notes of red licorice that come through - tangy, spicy but quite sweet, with a hint of cherry that borders on medicinal. But as a lager it's nice and clean on the back so it doesn't get too bogged down, just provides lots of sweetness and then clips it all off to make it moreish. Impressive; I like it.

Decent body for the style; fairly thin but not without presence in the mouth. Not bad at all.

Yeah, I like that. Sweet candy, but nicely balanced and ultimately clean.

Bottle muled back to the mainland by Father Fletcher. My father, not as in some Catholic priest called Fletcher.

Pours a dark reddish brown, with overly voluminous head. Good density and texture to the bubbly foam as it sinks, without leaving a whole lot of lacing behind. Looks alright, but could tone down that head; it's not true to the style and looks more like a carbonation issue.

Smells slightly roasty and chocolatey. Not smack in your face ballsy, just dark, earthy and slightly spicy with a slight herbal character lingering at the back. I do like my brown ales more on the ballsy American side but as a milder drop, this certainly ticks all the right boxes.

Taste is much more exciting than I gave it credit for. Lovely blend of rich nutty chocolatey malts pop in the mouth from the get go. Sweet yet roasty throughout that develops a good dark, lightly burnt bitterness on the back without being charry or astringent. Lingers with a faint cocoa-rich chocolate finish which is just lovely. As is this palate generally.

Mouthfeel is a little prickly, as the body is necessarily light. Carbonation just sizzles a little as it goes through and leaves a bit raw. Feels consistent with that excessive head at the start and could be quite easily fixed, I feel. 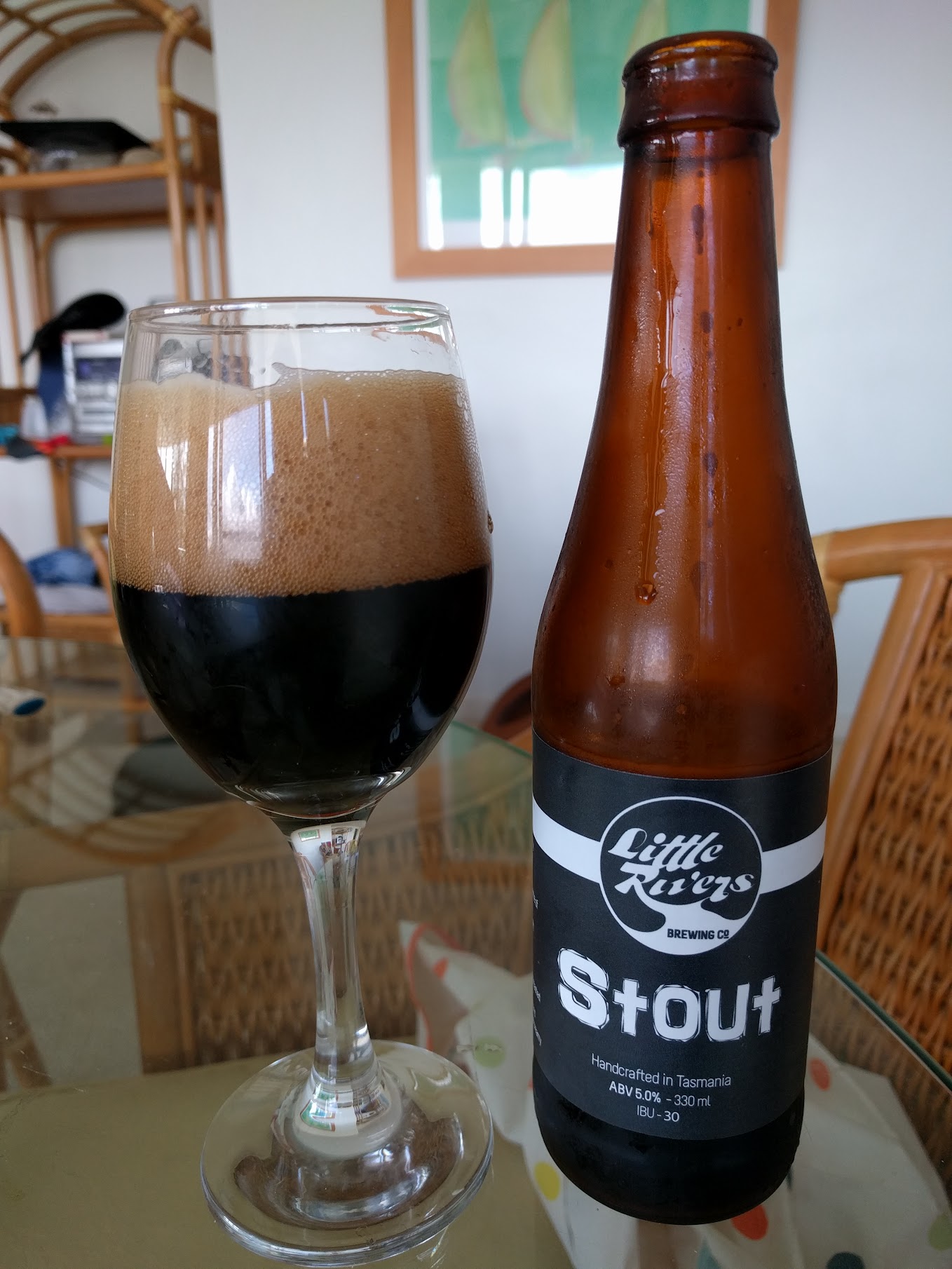 330ml brown bottle purchased for me somewhere in Tasmania by my Dad.

Pours a proper black-brown colour, quite pleasantly opaque in the body, although quite thin and fluid in weight. Head is a coarse-bubbled cap of beige that leaves a few floundering streaks of lace. Looks reasonable, but no more.

Nose is fairly straightforward. There's a pleasant, uninspired coffee and toasted note around the front, with some sweeter notes like roast nuts providing depth. The sharper notes turn slightly dusky, with a hint of ash and smoulder.

Taste is a bit better too. There's a pleasant malt structure that allows just a bit of breadth to the palate. It's toasty and nutty, but subdued somewhat by both the lightness of body, which caps the length of the palate, and the ashy character, which provides a punch of bitterness towards the end.

Feel is surprisingly supple, despite the lighter weight. It allows just enough time for the flavours to express themselves.

Overall, it's a pretty decent stout. It ticks the boxes without doing anything especially exciting. Mind you, it doesn't do anything much that's wrong, either.
appearance: 3.25 | aroma: 3.5 | taste: 3.5 | feel: 3.5 | drinkability: 3.5
Stronach Hoppy Lager
5.8% India Pale Lager from Little Rivers Brewing Co
Overall:
62 / 100
(Decent)
330ml brown bottle purchased for me somewhere in Tasmania by my dad.

Pours a very hazy peach-golden colour, with a frothy, crackling head of white that sticks in long sheeting clumps. Carbonation is pleasantly fine, forming in nice beaded strings. Body is swift and fluid, like it should. It's a pretty good-looking beer.

Nose is a little bit flat for something claiming to be "hoppy", especially since it claims to have the "flavour and aroma of an American IPA" on the label. There's a slight faint floral quality to it, combined with a bleak sweetness that's slightly vegetative. It smells a little like choko or starfruit.

Taste is reasonable though, and it has a pleasant sharpness to it, both from the light crisp body of the lager, and a clean vector of hops through the centre of the palate. The aftertaste is a little flabby though, letting some semi-sweet lager malt sit on the palate too long. As a result, it lacks cleanness in the finish, which is something I think it's fair to expect from a lager, especially a hoppy one.

Bottle given to me by Father Fletcher for Christmas 2016. Would have been enjoyed in front of the Boxing Day test if it weren't raining in Melbourne.

Pours a dark, murky reddish brown colour. Clear so it shows some light through. Head is off-white, nice and dense, thin rim when poured, just an edge of bubbly lace around the edge left. Looks perfectly fine.

Smells really pleasant, although I'm not sure it's really what I expect from the style. Nice roasty character, but largely sweet with a dark chocolate note and a fair whack of vanilla bean. Slight coffee roast edge, but yeah it's really quite pleasantly sweet; somehow a bit too much for the style and I'd like a bit more bitterness lingering. Still, here's hoping for the palate.

Taste delivers a lot better, actually. Has that dark, roasty edge from the get-go, but pulls back particularly on the sweetness, with just a faint caramel malt note underlying the mid-to-back. Slight roasty bitterness returns towards the finish, with subtle chocolate undertones and a hint of raisin, then cleans off in a nice crisp lagery way. Faint whisper of bittersweet chocolate lingers on the back and a little dry spice as well. Really quite a pleasant drop.

Mouthfeel is as you'd expect from the style; light, quite thin really and somewhat prickly from the carbonation as a result. Feels a little insubstantial just based on some of the flavours.

Drinks really well; pleasant blend of bitter and sweet flavours that's well balanced and well cleansed. It's not a style that we get a lot of in Australia, but if we could get more like this I'm definitely all for it.
appearance: 4.0 | aroma: 3.75 | taste: 4.25 | feel: 3.5 | drinkability: 4.25