Pours a hazy, yes, hazy orangey amber. Head is healthy; bubbly and a little whispy but a good three fingers left over after a while. White, some isolated clumps of lacing left behind. Pretty decent looking NEIPA.

Taste is enjoyable, doesn't quite pop with the same complexities as the nose. Starts out quite citric as well with some piquant lemon and grapefruit notes, develops some almost vegetative character with sweet pumpkin followed by burgeoning mango and passionfruit. Still fairly sharp and citric on the back but without any big astringency or pull, just this swipe of citric tang, and feels a little empty in the middle where the malt could be a touch bigger. It does what it says on the label for sure, but it's not quite as big or juicy on the back as I may have expected. Otherwise nice flavours.

Yeah a little bit of pull and some sizzle from the carbonation. Just feel it's a little thin, so fairly crackly and dry at the same time. 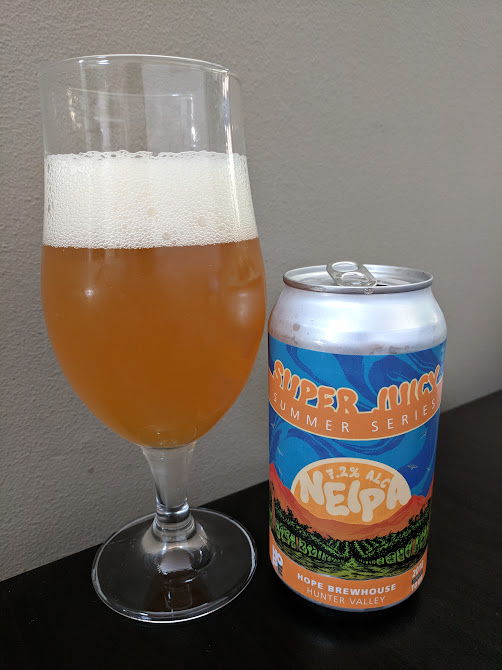 Another NEIPA. I like the style, but you'd think people would be finding something new to do by now, right? 375ml can purchased from Camperdown Cellars in Leichhardt.

Pours a properly hazed vibrant golden colour, with a frothy, loose-bubbled head of white that leaves some specks of lace. Carbonation is very fine, but overall, it looks rather still. Body is quite light. It looks good though: and more, it looks very much like what it should.

Nose is very pleasant. Indeed, quite juicy and bright, perhaps turning towards orange pithy. There's a faint hint of grassiness, and a suggestion of dried hop pellet, but it's held straining back at the end of that leash, and it pretty much survives. Instead, you can take it as juicy, smooth, fragrant and bright.

Taste is very good though. There's a balance here in the body, making the faintly bitter orange brighter and smoother than it would be otherwise. It's not sweet, but there's just the right amount to create that illusion of creaminess. Despite this, the feel is quite light and evanescent. There's just a bit of seltzer at the finish, which you would say is wrong for the style, but actually provides a lovely piece of punctuation.

Overall, I'm genuinely impressed. The style is du jour at the moment, and every dog and his attached human is attempting it. But Hope have a good history of hop-forward beers, and they clearly understand the dance of this style. This is one of the better ones I've had from Australia.
appearance: 4.0 | aroma: 3.75 | taste: 4.25 | feel: 4.0 | drinkability: 4.0
The King's Nuts (PB&C)
4.8% American Brown Ale from Hope Brewhouse
Overall:
65 / 100
(Solid)
Peanut Buttery Choc Brown Ale, brewed for GABS Festival 2017. Tried there on tap.

Pours an amber colour, too pale for a brown ale. Head is beige and more the right colour. Retains alright, foamy. Too pale, but not bad.

Smells nutty, for sure. Big peanut character on there with some subtle sweetness. Decent.

Taste is quite good. Chocolatey malt character that develops some sweetness and roasty character in equal measure. Roasty on the back and nutty on the mid; does what it promises and does it pretty well.

Body is a little thin but it's fine for the style and the size.

Not bad, but ultimately a bit unexciting. I think a more ballsy chocolate character could have made this really interesting because otherwise it's what it says on the label without any big bangs of flavour.
appearance: 3.25 | aroma: 3.5 | taste: 3.75 | feel: 3.5 | drinkability: 3.5
DIPA
9.0% Double IPA from Hope Brewhouse
Overall:
56 / 100
(Decent)

Can gifted by Jez for Christmas; tried on NYE with Chris.

Smells huge and resinous. Big citrus tang, with grapefruit and blood orange and lemon; dank and sharp with a slight floor cleaner aroma, and an odd licorice fragrance as well. Bit odd, and seems a bit full on with a lack of malt.

Taste is way up the other end. Really malty, caramel, sweet with some light resinous notes especially on the back. Hops are not big on the palate but just there as acidic bitterness on the back, and it's largely malty that gets a slight metallic character late-mid. Bit stodgy really, and not quite fresh or hoppy enough for me.

Decent body, of course, because it's all malt. Not too heavy though, the hops have a texture on the back more than they have a flavour. 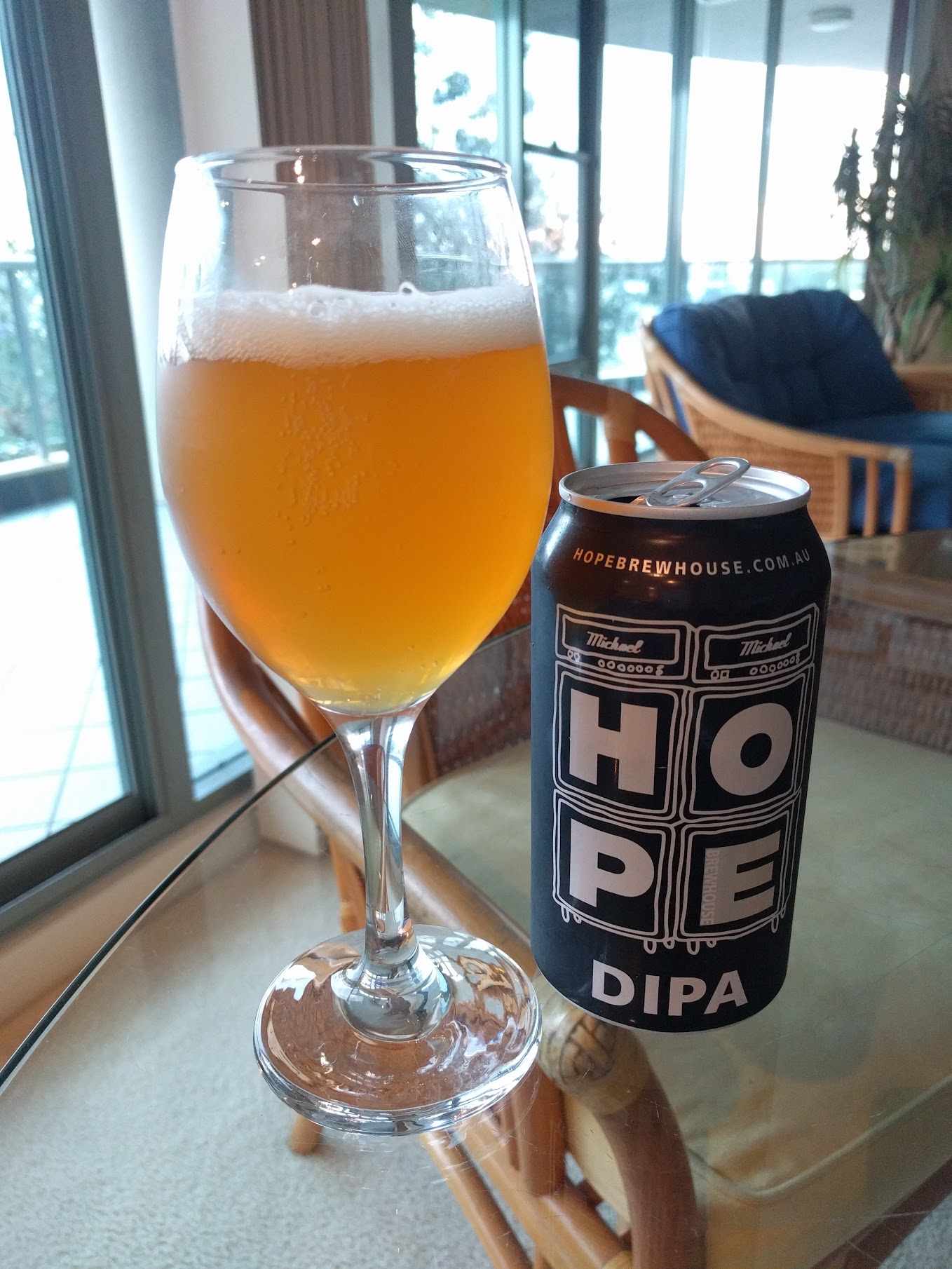 375ml can purchased from Oak Barrel in Sydney.

Nose is pretty decent, but it lacks a bit of punch. There's pleasant citrus juice characters to it, though, with an NE IPA aroma of squeezed OJ backed by a little pine sharpness. It's lacking oomph though, and it could use another sharp note to add to the complexity. Despite this though, it's still pretty decent.

Taste is also pretty solid. There's an impressive lack of malt here—and I say impressive, because it allows the juicy hop characters to be the main event. Despite this though, the 9% alcohol is remarkably well hidden, which makes the lack of malt all the more remarkable. Mostly, we get juicy, pithy citrus notes throughout, which is a really interesting thing to happen.

Feel is slick but mild, it's all part of the tapestry that allows the booze to be so well disguised.

Overall, I'm genuinely pretty impressed with how this is made. If it had a bit more punch of aroma I think it would really be extraordinary, and it needs something more complex on the palate. But it's hard to deny
appearance: 4.25 | aroma: 4.0 | taste: 3.75 | feel: 4.25 | drinkability: 4.25