If I were giving out awards for the worst beer label, name, description, everything, this "Mexican Lager Brewed with Sweet Corn" would make me change my mind about giving out the award, because no subsequent winner of this award could ever match this. I have a feeling there's an alarm in Sailors Grave's head office that started sounding when my brother bought this can to alert them that someone had finally done so. "Well, this calls for a celebration..." anyway.

Pours a pale golden colour, cloudy. Head is whispy, white, sinks quite quickly. Lacing sticks around alright and a decent cascade when I tilt. Looks pretty interesting for the style.

Smells pretty good too, surprisingly. Has a big citric tang with some tangerine, plus a good sweet malty undertone- yeah, sweet corn might be in there; it's reminding me of vanilla and cinnamon scrolls. It's an astonishingly good aroma.

Taste is not that great. Nice sweet malt front, with more of those vanilla and cake batter notes, some caramel tinges as well. Bit of light citric tang midway, just light and dry orange peel notes. Finish is quite dry and clean; gives a bit of a chemical and solventy flavour late. Lingering sweetness that doesn't quite sit with the metallic bitterness. Feels a bit of a shame when there could be more hopping to freshen up the back as it just feels neglected on the finish. Definitely better than I expected but the byproducts from adjunct use end up dominating a bit too much.

Mouthfeel is light, slightly fizzy but some body presumably from the corn adjunct, just retains some substance beyond just light fermented grain.

Yeah it's definitely a lot better than the label suggests, but then the label really looks pretty basic and derivative, and terrible. So the fact that it's decent at all makes it better than the label; in fact it's also pretty nice drinking.
appearance: 3.75 | aroma: 4.25 | taste: 3.5 | feel: 3.5 | drinkability: 3.5
Altocumulus Blueberry
4.0% Berliner Weissbier from Sailors Grave Brewing
Overall:
61 / 100
(Decent)

Can gifted by Jez, enjoyed by myself.

Pours a brilliant blue-tinged red colour with foamy white head, maybe a slight pink tinge to it. Doesn't really stick and body is clear. Looks a little soft-drinky but with head.

Smells funky. Quite earthy, with a barnyard kind of rankness, some mild fresh sweetness from the berries and a hint of citric hop. Decent blend but not as vibrant as the tangerine version.

Taste is a little lacklustre. Nice enough fruity blend upfront with some mild mandarin and orange notes, blending with some sweeter berry notes that hang on towards the back. Mild but distinct tartness towards the back with a slight lacto acidity, and then dries up to a bit of a yeasty finish. The back is a bit unfortunate but is actually quite a nice transition and finish to the slightly sweet berry mid-palate. It could still use a fair bit more freshness upfront.

Mouthfeel is mildly fizzy and a little thin. Good amount of texture though, for the size and style.

Dry-hopped Tangerine Berliner Weiss. Can bought for me by Jez for Christmas, reviewed by myself on a Saturday night.

Pours a very cloudy pale yellow colour, slightly saffron tinged. Head is decent when poured but just settles into an unstable ring of bubbles. Some clumpy yeast sediment plopped out of the can at the end, and I'd say it's a shame but the last beer I had that happen turned out to be a cracker. So I'm OK with it; looks fine.

Smells lovely; big rich citrus character with a real depth of sweetness and acidity but just overall a fresh zest to it all. Touch of musk and honey around the edges as well and some floral touches from the dry-hopping. Smells great; really great.

Taste is pretty good, for the style for sure. The late-hopping and tangerine character kicks off early, so the very slight grainy malt upfront quickly turns zesty and fresh, with a big citrus tartness but without a harsh or astringent character. It also softens the palate for the necessary tartness on the back, which is a bit more puckering, but also juicy like a good tart lemonade. Mild bitterness on the back as well really just mellows it out, and it tastes like some ingeniously subtle hopping that lets the wildness dominate but without overloading the palate. That's an unusual profile but very nicely balanced.

Sizzly mouthfeel; touch of puckering dryness. Not too much of either though and they're kind of necessary for the style.

This is very clever brewing. I've found that Sailors Grave do some silly, over the top avant-garde things, that often have too many elements, and I've found them hit-and-miss in the past. This, though, is high degree of difficulty that's been thoughtfully and professionally brewed. It's taken a while but this is the first beer that's really made me understand the love for them. Top tier stuff.
appearance: 3.5 | aroma: 4.25 | taste: 4.25 | feel: 3.75 | drinkability: 4.75
First Harvest Grisette
4.3% Grisette from Sailors Grave Brewing
Overall:
68 / 100
(Solid)
Dry-hopped Raspberry & Elderflower Grisette. Tried at GABS 2017 from the brewery stall but not on tap - they poured it from a can.

Tastes mild and tangy. Quite nice, with some earthy spice coming through midway but doesn't develop a whole lot. Finishes dry but pleasant; very drinkable.

Thin and a little fizzy but a decent body showing through for the size.

Very drinkable beer. Slammable, even. I think the floral/fruit adjuncts don't add a whole lot of character but they help take the edge off both the extent of the funk and the fact that it could seem a little thin. Pretty decent.
appearance: 3.5 | aroma: 3.5 | taste: 3.75 | feel: 3.5 | drinkability: 4.0
Whisky Sour Berliner Weisse
4.3% Berliner Weissbier from Sailors Grave Brewing
Overall:
61 / 100
(Decent)
Tried on tap at GABS 2017 (from the brewery stall).

Looks bizarre. Looks like a spectrum of red hues, up to a pinky orange kind of colour. Cloudy. Quite absurd.

Smells funky and weird. Orange, spiced buns, dark fruit. Not quite tart enough to justify the weirdness, oddly sweet in the end.

Taste is better, maybe. Sweet citrus notes. Tangy, but sweet - kind of jammy and somewhat malty too, for the style. Not too bad.

Mouthfeel is fizzy, and tangy. Bit thin, and too much pull. Not great but kinda expected for the style and size.

Tastes biscuity, then just gets bready/yeasty. Some fruity characters coinciding with it towards the back, but really doesn't freshen up nor have any real bitterness. Uninspiring, really, but not unpleasant.

Decent body, not too dry on the back. Drinks alright.

Smells barnyardy. Tangy, hints of apple and pear. Fresh and nice but quite simple.

Full, smooth mouthfeel, quite creamy. Maybe could use a touch more texture, actually, but good drop. 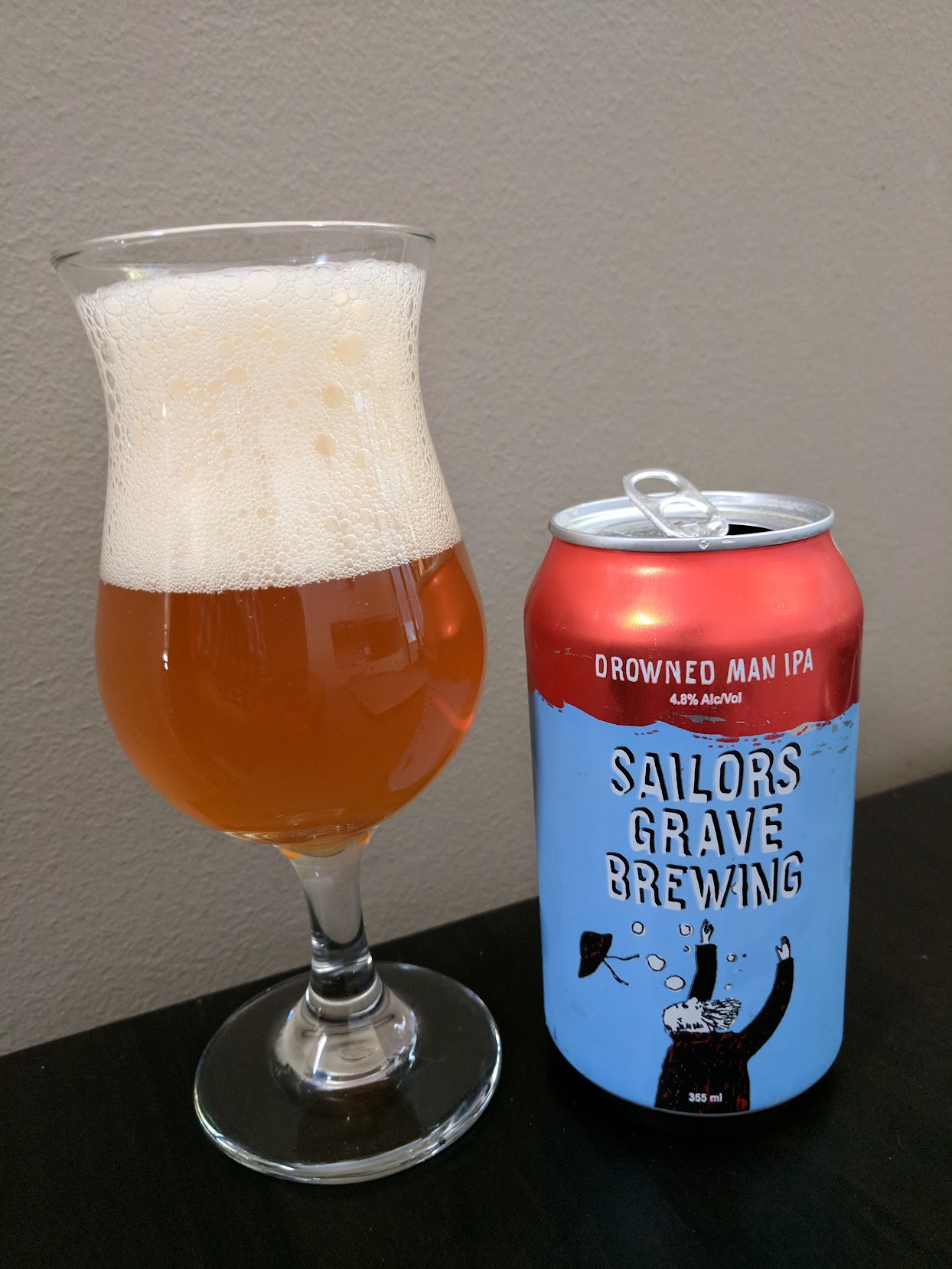 12oz can purchased from Beer Cartel. No freshness date on the can, although there's a glob of pink ink on the bottom, which may be the result of a malfunctioning freshness date printer.

Pours a slightly hazy deep golden colour, with a rocky, coarse-bubbled and immediately huge head of white, that settles out to a skeleton of the same. Lacing is left in straggly patches, but it speaks to me of overcarbonation.

Nose is generically hoppy, but with a rather thin, flat malt character behind it—if anything, it's this dull malt note that drags the rest of the aroma down with it. It adds a note of plaster and uncooked bread dough which is frankly unappealing. The hops only have a small amount of joy to leaven it.

Taste is about the same. The malt character and structure is genuinely wrong to me. It's savoury in the wrong places, with a thin, unappealing sweetness in the other places. Hops are only an afterthought, where they should be front and centre. It ends up tasting flat, drab and uninteresting.

Feel is quite dead, after it blew out all of its carbonation. 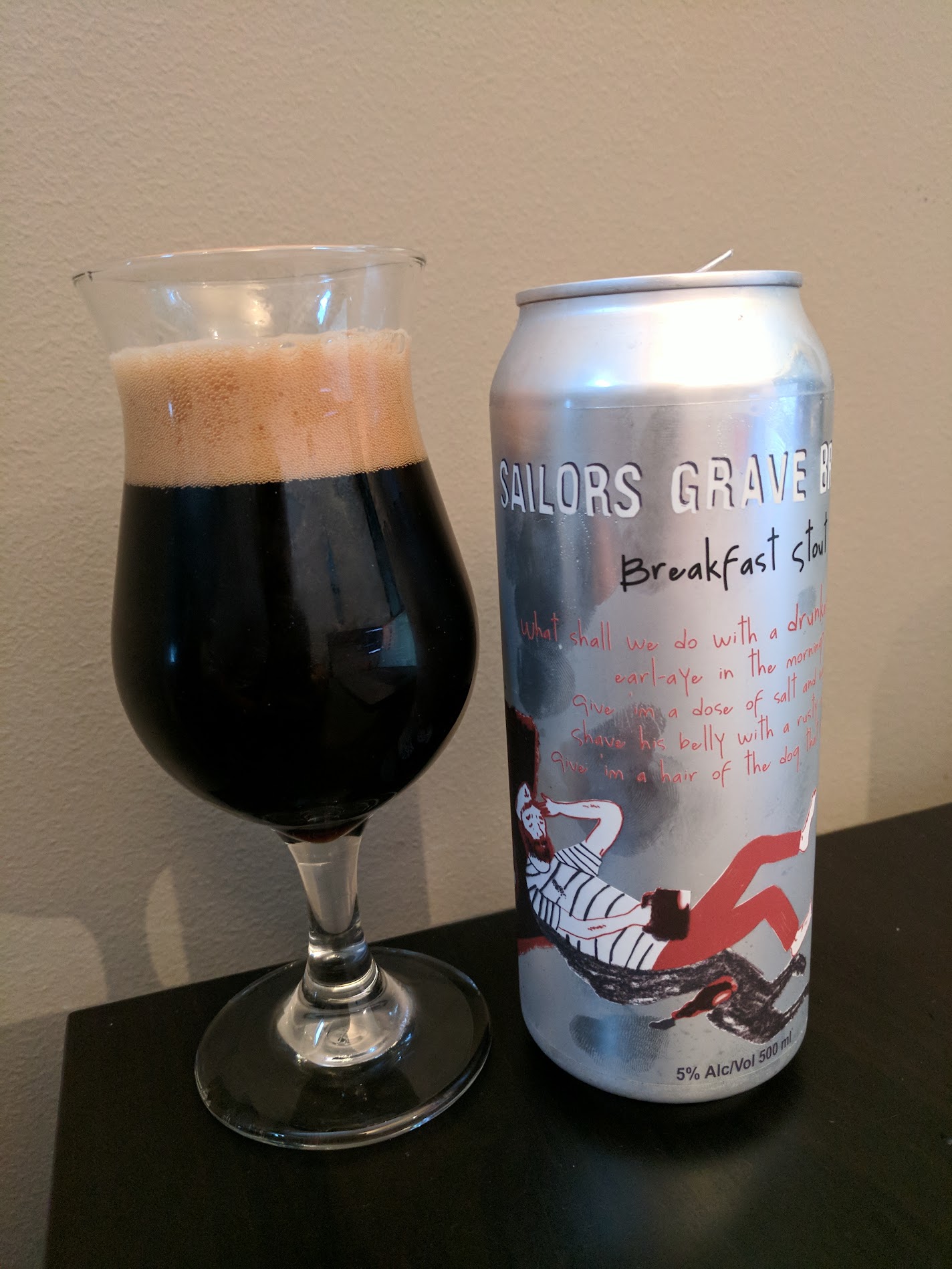 500ml can purchased from Slowbeer.

Pours a ebony black colour, with a very fine, crema-coloured head that leaves lovely fine, intricate lace. Carbonation is quite slow, but surprisingly coarse as well. Overall, though, it's a good looking beer.

Nose is pleasingly smooth, but with a robust toastiness giving it depth and darkness. There are pleasant buttery undertones of vanilla and a slight coffee character which almost turns slightly metallic or acidic. It's pretty nice all up.

Taste is actually slightly better. There's a sharpness through the middle, with a fresh, robust coffee character that develops towards the back, smouldering with a hint of tobacco and ash. But all around this it's really pleasantly smooth with notes of vanilla and oak. Carbonation adds a fine sparkle throughout, which is very pleasant.

Overall, it's a really tasty brew. It's subtle in places, which provides balance, but it has character and boldness enough to make it interesting. That makes for a really pleasant beer all up.
appearance: 4.0 | aroma: 4.0 | taste: 4.25 | feel: 4.25 | drinkability: 4.0
Milky Way
4.3% Berliner Weissbier from Sailors Grave Brewing
Overall:
62 / 100
(Decent)
Lactose, Custard Apple and Vanilla 'sour' brewed for GABS 2017. Called it a Berliner Weißbier as I don't have any other stylistic info, seems apt for the size.

Pours a straw colour, big sedimenty cloud in the body. Head is white, made up of tiny bubbles and retaining well. Looks great.

Smells subtle. Notes of tart green apple, with maybe a hint of oak and a touch of sweet spice as well. Not a whole lot to it, really.

Taste is quite similar. Cereal grain upfront, that develops some tart cider notes on the mid - green apple and a crisp tart note, then finishes quite yeasty. Touch of lactose sweetness on the back. Not great. I expected a lot more, particularly as I love custard apple and I feel it could really explode in the mouth if used less judiciously than they seem to have here.

Mouthfeel is pretty good for the style and size. Thin, but not particularly puckering. Has a good presence. 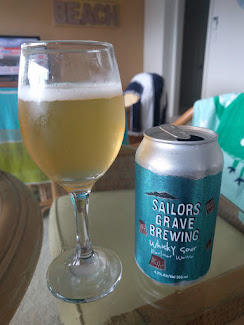 355ml can purchased from Slowbeer.

Pours a very pale, rather clear yellow colour, with a fizzy crest of white that persists as a weak ring, and leaves no lace. Carbonation forms in tight, fine streams. Body is very light and thin. Looks probably as it should for a Berliner.

Nose is, probably, suitable given what they're going for. There's a pronounced yoghurt-y lactic character that comes through, but it melds with some oddly nutty, toasty notes, and a suggestion of whisky to give it a rye sour mash kind of aroma. Other notes come through as well: bitter almond, cherry, coconut and vanilla. But these provide a kind of unstructured cacophony rather than a coherent complexity.

Taste is similar, although here it really does taste a lot like a whisky sour. There's a nuttiness that works with the acidity to provide a faint suggestion of rosewater. More almond, more oakiness and vanilla, and a slight bite on the back that finally, feels more like citrus than fermented yak's milk. Feel is light, and fairly spritzy.