Pours a rather loose, bilgey brown colour, with minimal head that only really sticks around as a collection of bubbles around the edge. No lacing. Minimal carbonation. The colour is fairly weak and looks a little bit like diet Coke. Underwhelming, to be honest.

Nose is very pleasant, with a strong toasted peanut character, mingling with notes of milk chocolate and lifted aromatics of cinnamon and pepper. It's quite sweet as well, suggesting more richness and volume than the body looks like. That could just be setting it up for a fall on the palate though.

Taste is actually pretty good though. It maintains a toasted peanut character throughout, and while the body is a bit thinner than I expected, it's lifted strongly by those aromatic spices in the back. Cinnamon is the most prominent this time, although with a mild hop character, it almost gives notes of carob and bouillon. Finish is light, but again, there's a dance of spicy notes that keep it lively.

Overall, I do end up enjoying this, but I'll admit it started in an inauspicious place. I think if it were one to two points higher in alcohol, and had the body to match, it would probably smooth over the rough edges, and assuming a concomitant increase in spice, it would be fuller richer and more exciting.
appearance: 3.0 | aroma: 4.0 | taste: 4.0 | feel: 3.75 | drinkability: 4.0
Great Lei
6.6% American IPA from Belching Beaver Brewery
Overall:
35 / 100
(Nasty) 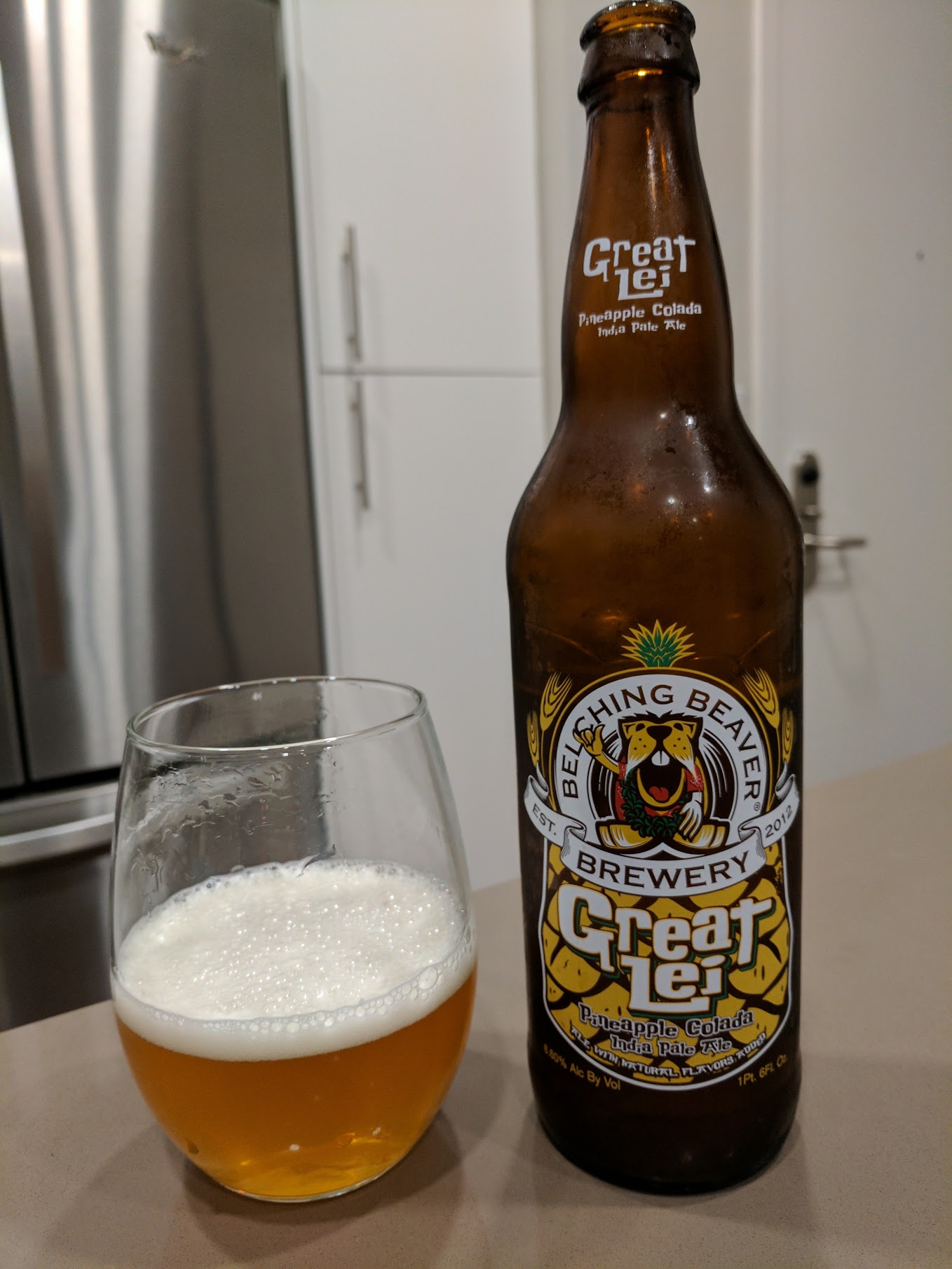 Pours a pleasantly cloudy deep yellow colour, with a coarse-bubbled head of white, that persists as islands of froth. Minimal specks of lace. Body has some fine bubbling, that stays rather static. Looks decent.

Nose is decidedly odd. Pineapple and coconut definitely come through, in a kind of fake, artificial way. They smell plasticky, and coalesce with a slightly skunky note, to give a weird perfume ester and herbal aroma. It ends up smelling rather savoury, and in an unsettling way.

Taste is worse. There's very, very little body to the beer, which means everything relies on that artificial pineapple flavour to give balance to the hops. And it fails miserably: it provides the aromatics of fruit with no sweetness, so the bitterness, mild though it is, rips through the back palate. The aftertaste is a brittle mix of oregano and the fleeting remains of the hops. It's really quite unpleasant.

Yeah, not good. This is not necessarily a misstep because of the pineapple and coconut flavours—it's a misstep because at its heart, it's not a good IPA. The malt is completely wrong, and that's the basis—it means everything else is building on shonky foundations.
appearance: 3.75 | aroma: 3.25 | taste: 2.0 | feel: 2.0 | drinkability: 2.25