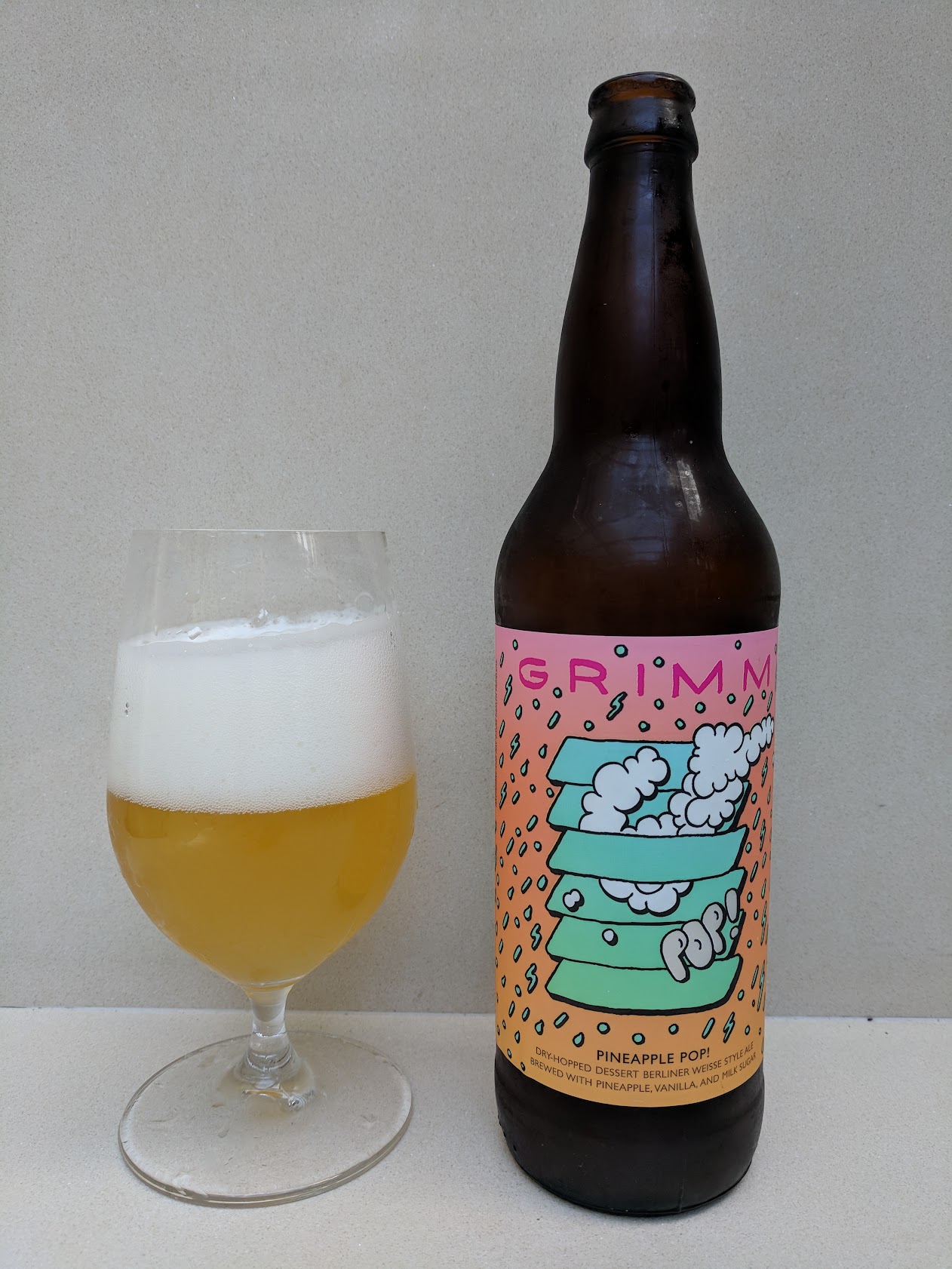 Pours a pleasant, slightly hazed golden colour, with a coarse-bubbled white foam head that leaves intricate lacing. Body is light, but that's not a big surprise for the style or the ABV. Carbonation is swift and minimal. Looks decent enough.

Nose is rather pleasant. It definitely has pineapple to it, but it's also a bit tarter than you expect for pineapple, with a slight lactic acidity to it. It also has a very slight vegetative or herbal note which makes it veer in a different direction.

Taste is also solid, but not particularly special. There's a thin, kettle-sour acidity to it on the front, that almost has a metallic twang to it. But after that, there's undoubtedly pineapple flavours to it, giving a kind of fake candy note to it. It almost has a sherbet and fairy floss character on the back.

Feel is very light. It's too light to support the flavours in my opinion, and it either needs to properly embrace the acidity, or it needs to have more heft.

Mildly hazy gold colour with overly generous head that whisps out a bit at the edges to leave some uneven clumps of lace. Alright but yeah the head is voluminous without substance, it's basically a politician.

Smells fairly pleasant. Funk with some good acidity to it, touch of some nice tropical stonefruit like guava, and some interesting spice notes - cinnamon and maybe ginger. Smells good is the point.

Taste is wow, another twist. Hmmm, not sure how I feel about that. The funk is gone, replaced by a far more pronounced fruit note like the fruit adjunct is all that's driving anything. Maybe a touch of pineapple, grapefruit and yes more guava, that then goes a little brassy late-mid and the finish lingers with more tropical and slightly tart notes with a touch of lime to it. Tangy, refreshing; not a long finish and not what I expected but pretty decent really.

Mouthfeel is a little thin with some juicy character around the edge. "Imperial milk stout brewed with vanilla and maple syrup". 22oz brown bomber purchased from The Willows Market in Menlo Park, CA. Shared with Dad during a trip to Orange.

Pours a deep brown-black colour, with a coarse-bubbled head of mocha brown that leaves sheeting, complex lace. Body is quite oily. It's not particularly thick, but is has weight to force the carbonation into a fine, powdery consistency, even as it moves swiftly. Looks pretty decent.

Nose is pleasant. There's a nice, toasty, biscuity grain character which forms the basis: semi-savoury but with a solid malt sweetness to support it. Above this are the secondary characters of fresh cut vanilla, unfermented wort, with a slight twang of copper. As it warms there's a release of some more aromatic characters like green tea and banana leaf.

Palate is worty again, but it's done in such a way that it never feels underattenuated. There's always a biscuity, savoury character that connects to it. Over this is a more simple sweetness with tones of brown sugar and maple syrup, and a hint of amaretto and cherry pip. There's a lovely, slightly bitter toasty note on the finish to balance it. It has a really nice complexity, and it manages to harmonise everything into coherence. 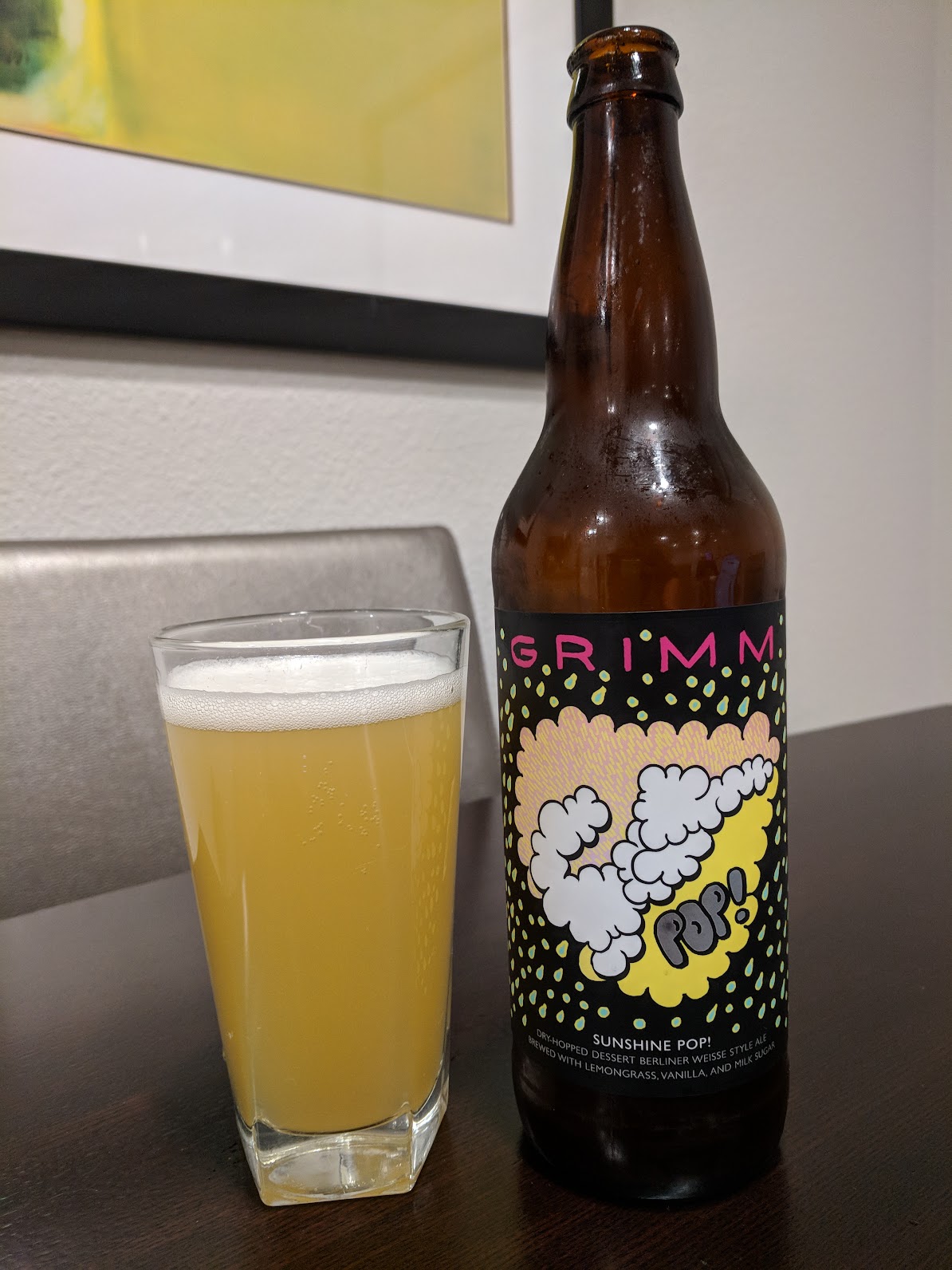 Nose is rather pleasant. There's a crispness from the berliner weisse base, which gives it a touch of acidity, but the dry hops are the element which stand out the most to me. They add a herbal element over the top, with touches of citrus—to my mind, certainly from the hops, and not from the lemongrass. But it's pleasant.

Taste is kind of backing up my skepticism. It has a tart, aspirin character on the front, with only really a thin suggestion of true lemon sourness. It sticks around though with a lingering lactic character which does no-one any favours. It ends up with a kind of cardamom character, a little like a curry burp. I'm actually not a fan.

Feel is thin and light, with a bite from the acidity.

Overall, I'm actually unimpressed. I've liked Grimm's beers in the past, and I thought with this they were going to deliver something unexpected and unique. But it's kind of like what you'd get if you brewed a mediocre Berliner weisse, then dry hopped it and added lactose to it. That's a shame, because I was hoping for something better than the sum of its parts.
appearance: 3.0 | aroma: 4.0 | taste: 3.0 | feel: 3.0 | drinkability: 3.0
Double Negative
10.0% American Imperial Stout from Grimm Artisanal Ales
Overall:
89 / 100
(Superb) 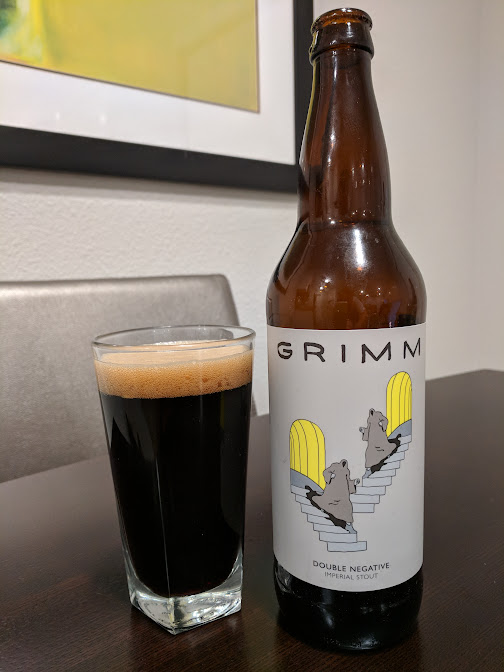 Pours a silky black-brown, with a pleasant, light mocha head of beige that leaves excellent lace. It slips into a film pretty quickly, but still provides bold delineation between the body and the head. Carbonation is very fine, but swift and vivacious, suggesting that this isn't a thick and heavy beer. It looks good, all up.

Nose is lovely, and it really shows the imperial stout bare and unvarnished. It has rich, deep complexities, but these are not through the combination of a reasonable beer, the oak its spent time in, and the whisky which once graced the cask. This is just built on the malt, with layers of sweetness and tempered roast providing chocolate, dark cherry, latte and undried peppercorns. Boom. This is really quite lovely.

The taste is also exceptionally good. It is, as suspected from the carbonation, a little lighter than average, but this is used to really great advantage. It allows some of the more fragrant characters to have their presence felt without being overwhelmed by a rich, dark sweetness. I get characters of rose, strawberry and sweet tomato dipping in and out amongst the rich earthy tones of the dark malt. Finish has characters of woodsmoke, tobacco and crushed nettles.

Feel is slick, but never heavy.

Yeah, wow. I'm really impressed. This is really skillfully done—the lightness is such an asset to a beer like this, but it is used to such advantage that it absolutely promotes all the complexity of the beer. This is a really fantastic beer.
appearance: 4.25 | aroma: 4.5 | taste: 4.75 | feel: 4.25 | drinkability: 4.5
Sumi Zest
11.5% American Imperial Stout from Grimm Artisanal Ales
Overall:
76 / 100
(Excellent)

Pours a dark, dark brown, mostly black. Head is beige, decent look but sinks quite quickly to a thin film. Lacing is a good reminder that it's sticky and substantial, as if you needed reminding from how very very dark it is. Pretty good.

Smells bitter and roasty. Fair chocolate notes with espresso and a touch of sour cherry as well. Hint of milk on there as well, just a light dairy character with a touch of acidity. Slightly intriguing but mostly pretty one-note black beer character.

Taste is unexpected. Big fruit notes with cherry and raspberry, like a good choc raspberry torte or something. Because oh yes, there's chocolate as well. Big roasty chocolate with a gooey sweetness and a sharp, acidic bitterness to it as well. Gets some booziness late that goes with the rich chocolate notes to create a huge warming palate. And just generally it's very warm and gooey and decadent tasting. Not very sweet for all that, really very bitter on the back and it's very much in my sweet (no pun intended) spot as a result. Maybe a touch thin on the back, like it just holds back on that strong dark bitterness. If it had delivered the death blow I'd be all over this. As it is it's quite tart and fruity. But very good.

A little thin-feeling so the carbonation shows through more than I'd expect. Bit of boozey warmth but not sharp or unpleasant. Still, unexpectedly thin.

Nice dessert drop. Feel like it delivers a lot of that tart fruit character, and the darkness is very bitter in tone but it doesn't quite deliver enough to really nail its dark colours to the mast. But I do really enjoy it.
appearance: 3.75 | aroma: 3.75 | taste: 4.25 | feel: 3.5 | drinkability: 4.25
Sumi Zest
11.5% American Imperial Stout from Grimm Artisanal Ales
Overall:
88 / 100
(Superb) 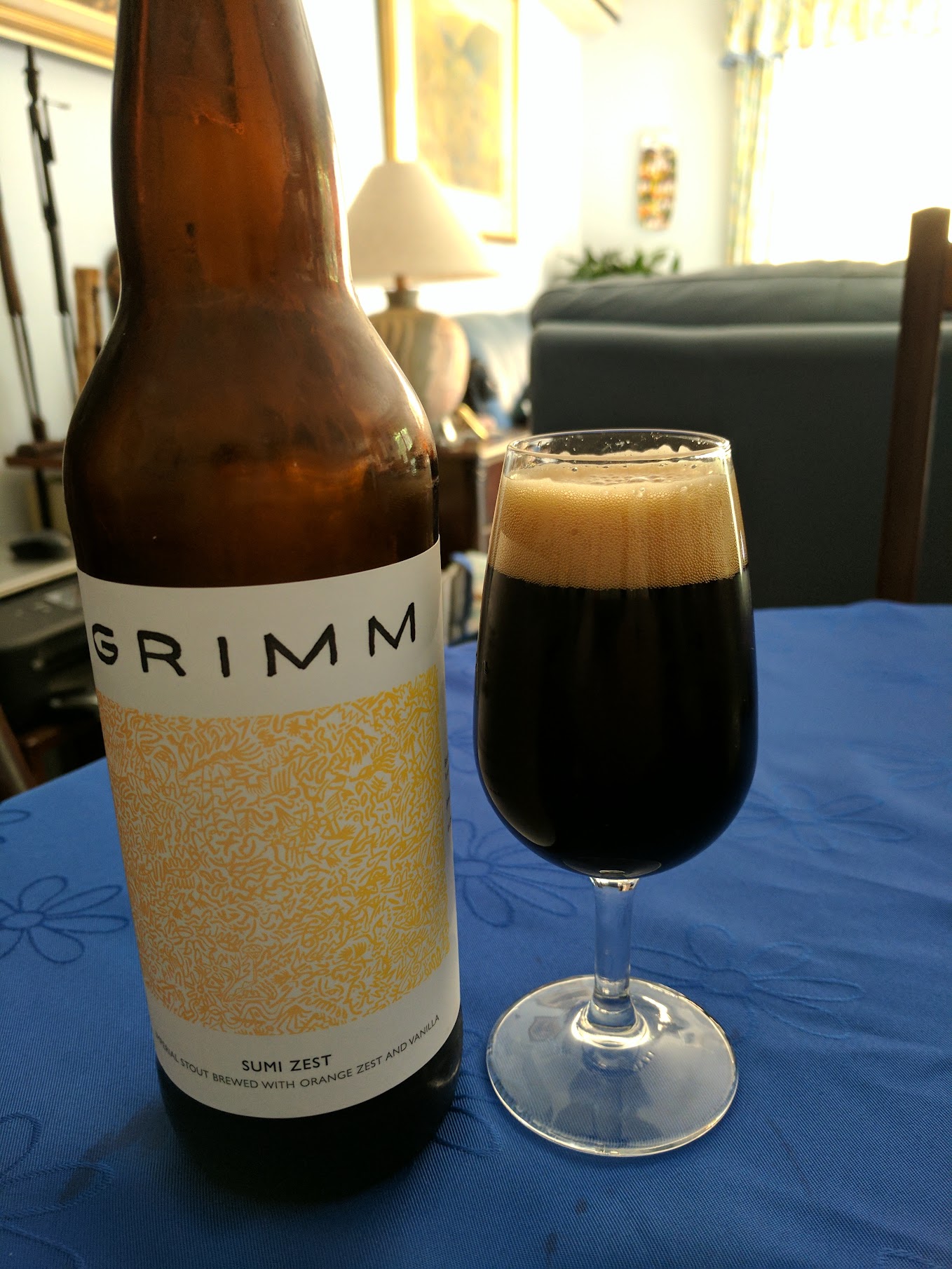 Pours a deep, opaque brown, with a foamy crest of pale mocha brown. Lacing forms in wonderful spidery patterns. Carbonation is very fine and powdery, moving swiftly as the body will allow.

Nose is extremely good, with a bold, semi-sweet orange-chocolate character, laced with loved depth of toasted coconut and oak. There's a toasted biscuit character as well that adds ginger-snap sweetness to the brew. It's really very good indeed.

Taste is also very good. It's a little dry and dark on the front, but soon, there's a richer character like melted dark chocolate that floods the palate. In the back, you also get a kick of that slightly zesty orange flavour, and more crushed vanilla biscuits. Finish is rich with dark chocolate—semi-bitter, but slick and rich, aided a little by a kick of booze.

What a superb beer. This is intricately crafted, but beautiful balanced despite all the disparate complexities. The things which set it apart do a great job of giving it its own identity, and without separating it from its brethren imperial stouts. It's both coherent and excitingly different.
appearance: 4.0 | aroma: 4.5 | taste: 4.5 | feel: 4.75 | drinkability: 4.5