Smells hoppy. Fruity and spicy, with a big citrus character together with notes of pepper and a strange weed character as well. By which I mean Mary Jane. Blood orange and persimmon too. Intriguing and pleasant.

Taste is a bit weird, huge malty character upfront. Like not big and boozey but just really sweet and malt dominating. Toffee, and caramel, that then gets taken over with this tangy citrus note; lemon and mandarin largely, so still reasonably sweet without that big bitterness. Slight tannic black tea note late on the palate as it goes to finish. Tangy but tannic. Really odd drop, but strangely enjoyable.

Slight harsh fizz to the feel as it goes down; some malt base to it but a bit rough ultimately. 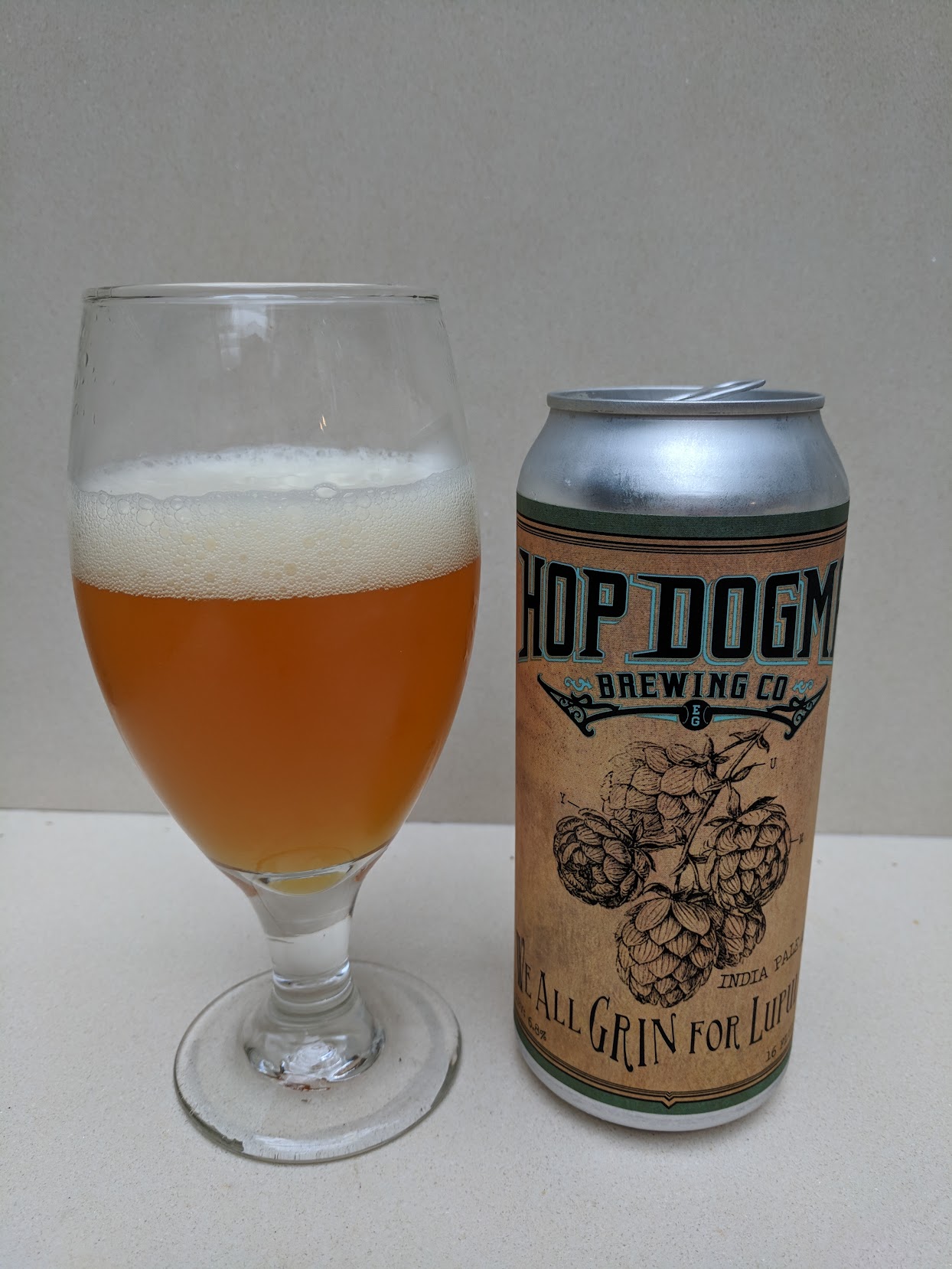 Pours a hazypeach-golden colour, with a frothy, and fairly sticky head of off-white that leaves good lace. Carbonation is fine, but swift, and a little bit lacklustre. Looks decent enough overall.

Nose is pleasantly hoppy, with a bright, cleansing note that tends a little towards pine, and sometimes to more herbal notes that you often get from English varieties. It has a seed and bracken kind of aroma to it, not unlike ploughing through the vegetation while hiking. Interesting.

The taste is similar. There's some bright, almost pithy characters from the hops which give the suggestion of something oily and fresh, before everything turns dark and earthy. More crushed herbs, snapped greenwood and sod. Back of the palate has an amazingly astute mimicry of celery. It's organic and slightly grassy.

Feel is prickly with a fine, velveteen carbonation.

Overall, I'm actually not much of a fan. It's not awful, but the hops are brash and unforgiving—this would be fine in a beer with stacks of fragrant essential oils and flavour compounds. But here the earthiness gets oppressive.
appearance: 3.5 | aroma: 3.5 | taste: 3.25 | feel: 3.5 | drinkability: 3.0
Fides In Fermento (Aged in Bourbon Barrels)
12.0% American Imperial Stout from Hop Dogma
Overall:
79 / 100
(Excellent) 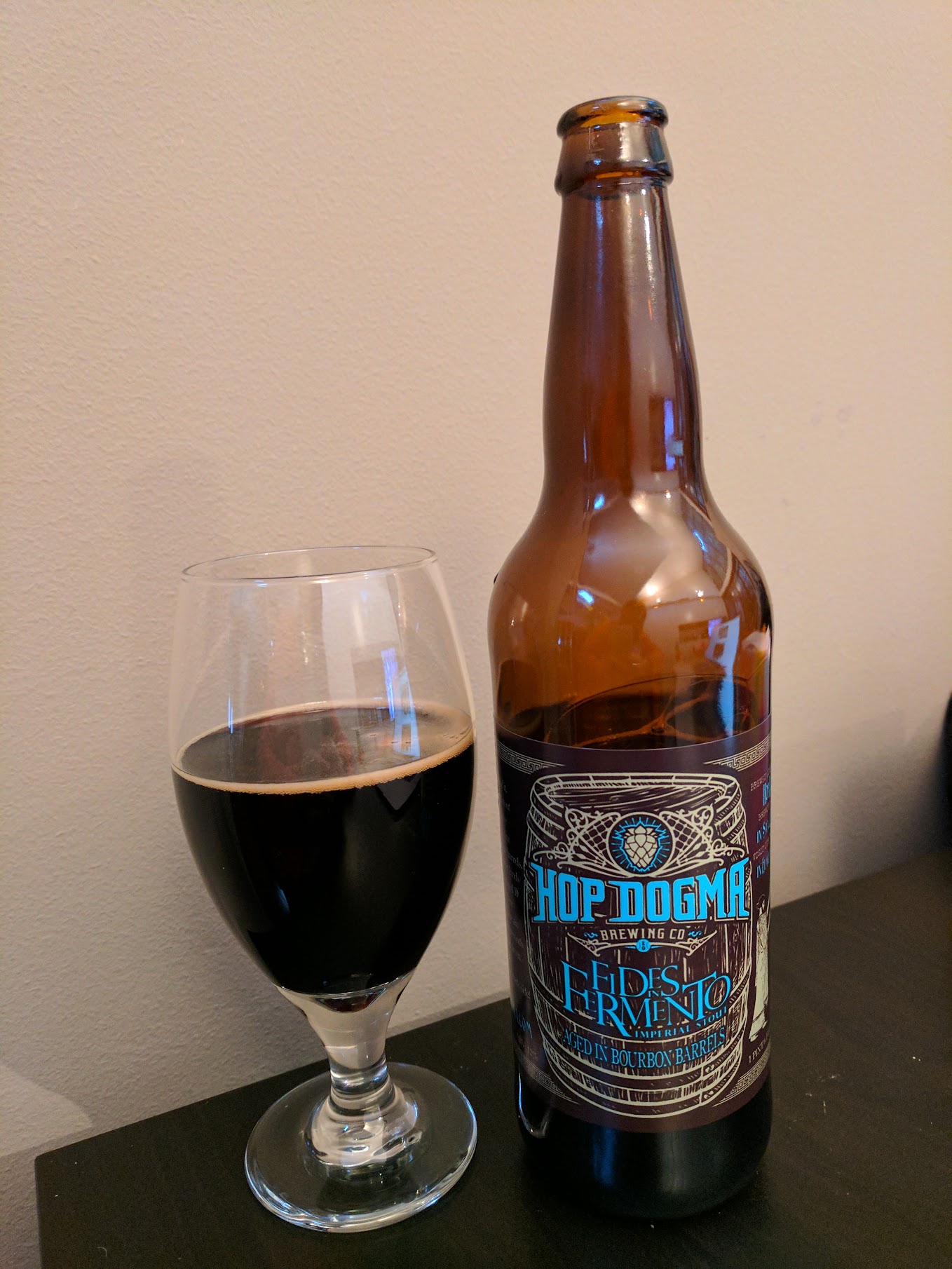 Pours a surprisingly fizzy, slick-bodied black brown. The head forms as a coarse-insubstantial crest of cocoa-coloured bubbles, but once they run out of effervescence, it settles to a fine ring. Carbonation afterwards is fine and fast when swirled or tilted. Looks decent, but it's something of an inauspicious start for such a big beer.

Nose is pleasant. Once the overt carbonic character burns off, there's pleasant characters of high-cacao chocolate, raisins and dark fruit. Bourbon barrel is also pleasant, but it's only a deep, woody undertone—not the punch of coconut & vanilla that American oak often gives. It's pleasantly not too sweet either, it has depth and sophistication. All nice things.

Taste is also pretty good. The oak here is much more prominent—it actually provides a semi-savoury dryness towards the back, which turns dusky and woody. It's a sophisticated, mature flavour. Otherwise, the characters are somewhat muted, but this actually works reasonably well—there's neither an overt sweetness, nor too much roasted bitterness. This means the rest of the palate is just slick and balanced, and it allows the wood to be the main event. It's as good a character for centre-stage as any.

Feel is slick and weirdly ephemeral. It has a pleasant evanescence, as though the alcohol just evaporates on the tongue.

Overall—yeah, it's a very decent imperial stout, that does some different things to the average BA variety. It's not in the upper echelons of the genre, but it's pretty solid in a style that's always going to elevate you to some extent.
appearance: 3.5 | aroma: 4.25 | taste: 4.25 | feel: 4.25 | drinkability: 4.0
Alpha Dankopotamus
6.9% American IPA from Hop Dogma
Overall:
63 / 100
(Solid)
Pours a shiny golden colour with a nice trickle of bead in the clear body. Head is off-white, very whispy and foamy. Sudsy, even. Nice sticky trails of lacing on the glass, all a bit uneven but that's generally a positive thing. Looks good.

Smells lovely. Very hoppy with all the right sharpnesses on it. Very resiny and citric, with sharp grapefruit, lemon, mandarin too. Touch of lemongrass and black pepper on the back. Slight rosewater note as well. Pretty special hop aroma; it's always a shame when there's nothing but hops on the nose but this is impressive enough for me not to mind.

Taste is more of what you'd expect. Slight caramel malt sweetness upfront but blink and you'd miss it before the hops take hold. Big, sharp and swollen, with a tangy bitter grapefruit note dominating. Notes of mandarin and some dark fruit around the edges, then late-mid it turns very astringent, with a slight chemical edge, and a touch of tobacco. The finish is reminiscent of floor polish and it's missing some of that tang to freshen it up. Lingers with a metallic, battery kind of flavour on the back. Maybe some more malt to carry through would soften it a bit too.

Tingly mouthfeel, hops are really stripping and corrosive on the mid. Finish is dry without being puckering so I'm thankful for that at least. 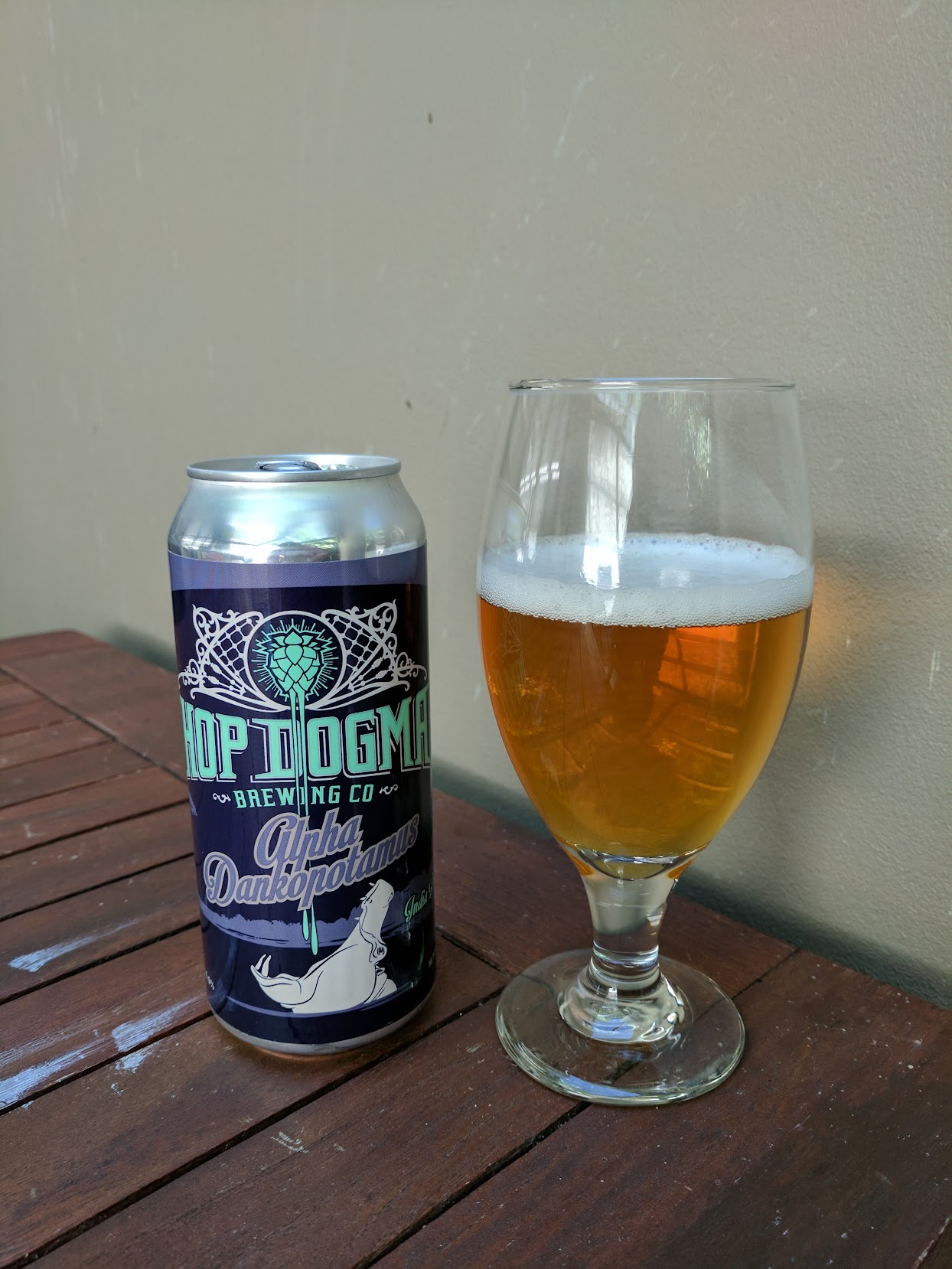 Pint can purchased from K&L Wine Merchants in Redwood City CA. Shared with Sam back in Sydney.

Pours a very clear golden yellow colour, with a coarse-bubbled, frothy head that leaves streaks of lace. Carbonation is fine and slow. Body has a bit of slick weight behind it. It looks good all up.

Nose is great. Really bold, fresh hop characters, with the dark, twisted citrus character which indeed gets described as dank. It has vinous qualities, with acid, cut celery and weed notes. Sweetness is also quite pronounced. Partly, this is from pleasantly aromatic fruity hops, but I suspect there's some additional heft from the malt as well. Very nice.

Taste is a little more staid. There is a bigger malt presence here, but it turns rather grainy and a little bit savoury. Hops provide a sparkling bitterness over the top, but they don't integrate that well. In the end, it just kind of flops around until it dies, leaving a slightly acidic, metallic bitterness in the finish.

Feel is nice. It's actually a bit lighter than I expected, but provides some pleasant effervescence to fill it out.

Overall, it's a nice beer, but the lack of coherence on the palate drags it down for me. The aromas are really great though—I'd just love to see that subtle complexity and interplay of the elements work as well in the flavour.
appearance: 4.0 | aroma: 4.5 | taste: 3.5 | feel: 3.75 | drinkability: 4.0