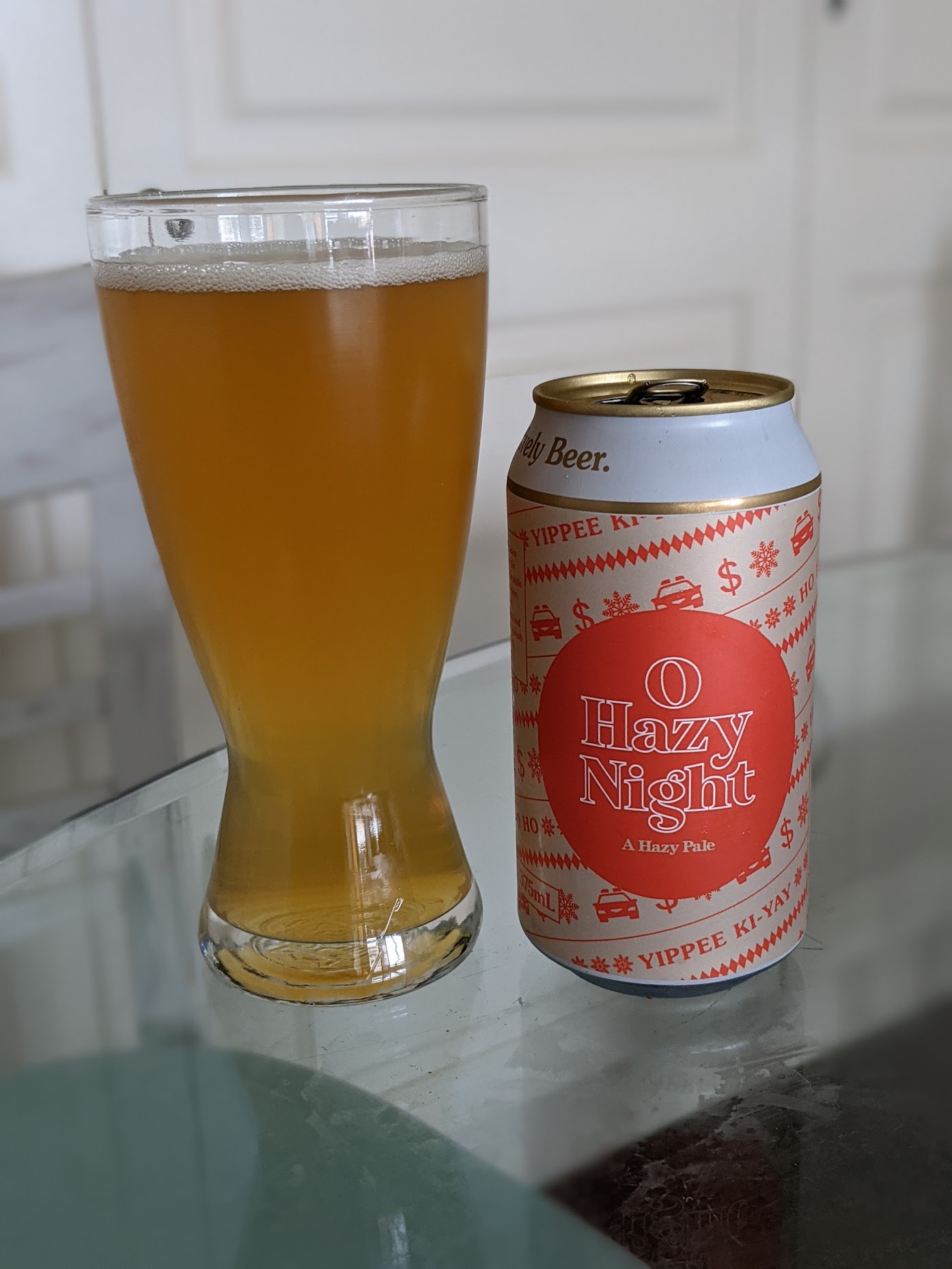 375ml can from the 2019 Carwyn Cellars Canvent Calendar.

Pours, yep, hazy—not turbid and cloudy like a full-blown NEIPA, with a loose-bubbled head of white, which settles out perhaps too quickly, leaving nothing on top after a very short period. Body is light and clean.

Nose is pleasant enough, with a light but rounded fruit character from the hops. Certainly there's a decent big tropical fruit character, sharpened by a more vegetative character that smells a bit like underripe papaya and carambola. There's a suggestion of a husky grain underneath everything too, which almost gives a slight savoury note. Interesting.

Taste is also largely what you expect, with a round fruit base from the hops and a solid if simple malt backing it. What then becomes noticeable are the characters which deviate from the norm. There is again a slight savoury, grainy note to it, and this interacts with the aromatic fruit notes to almost give a bite of ginger. Finish is dry, and ends with those husky grain notes.

Feel is light, and perhaps over sparkling at the end, which gives it a fizzy seltzer quality.

Overall, it's certainly pretty drinkable and refreshing. There are some pleasantly unusual notes to it, but overall it's not a groundbreaking beer. And for a beer in a pack that has had some absolute pearlers, this gets lost in the background noise.
appearance: 3.0 | aroma: 3.5 | taste: 3.5 | feel: 3.5 | drinkability: 3.75
Philter XPA
4.2% American Pale Ale from Philter Brewing
Overall:
70 / 100
(Very Good)

On tap at the East Sydney hotel to kick off Sydney Beer Week 2017.

Pours a pale gold with steady stream of bead. Head is white, foamy and dense with good tight retention. Lacing is nice. Looks good but has a strange look of really manufactured beer, like it's too perfect. Need dem flaws to remind me it's a real beer.

Smells nice. Hoppy but light, with a slight dry yeasty character as well. Citrus and stonefruit, peach and apricot. Very slight nuttiness as well. Dry and clean; very appealing for a day like this.

Taste is good too; zesty, tangy citric hops throughout, especially on the front. Doesn't get a big fruity note because it's quite dry midway, and gets a little metallic tint before it. The finish is dry, mildly yeasty but not bready or anything, just lightly fizzy and herbal and refreshing. Pretty decent XPA; good hop character and decent clean finish.

Drinks pretty nicely. Slight fizz on the back and mildly bitty. Little thin and carbonated but fine for the style.