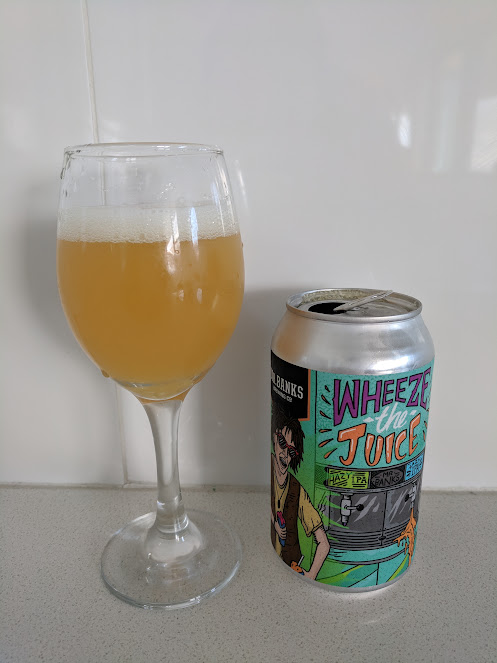 12oz can given to me by Sam for Christmas. Full disclosure, I drank this directly following my first encounter with Heady Topper, so it has some competition.

Pours a very hazy lemon-gold colour—it feels hard to tell its true colour due to the depth of haze. Head is coarse, forming a frothy ring that leaves mild streaks of lace. Carbonation is languid but sparse. Looks decent enough.

Nose is juicy, in a rather banal way. It has the aroma of pasteurised OJ, perhaps with a little bit of age on it. There's an odd kind of sugar-meringue character to it too—brittle and sweet. That's kind of it. It's a little flat, and with a slight suggestion of being off.

Taste definitely has something off about it. I think there's a slight lactic bite to it, which moves it off what you expect. There's still some nice juicy characters to it, here with hints of peach and pawpaw, that provide a warmth to the body. It's kind of okay if you get over the yoghurty character.

Feel is smooth. Carbonation is light, but springy, letting the silkiness of the body do most of the work.

Overall, this is a decent beer. It suffers from recent comparisons, ahem, but I suspect that it would have been okay in isolation. I still think there's something actually wrong with it—it has a definite lactic fault to it—but if you kind of put your blinkers on, it ends up okay.
appearance: 3.75 | aroma: 3.0 | taste: 3.0 | feel: 4.0 | drinkability: 3.75