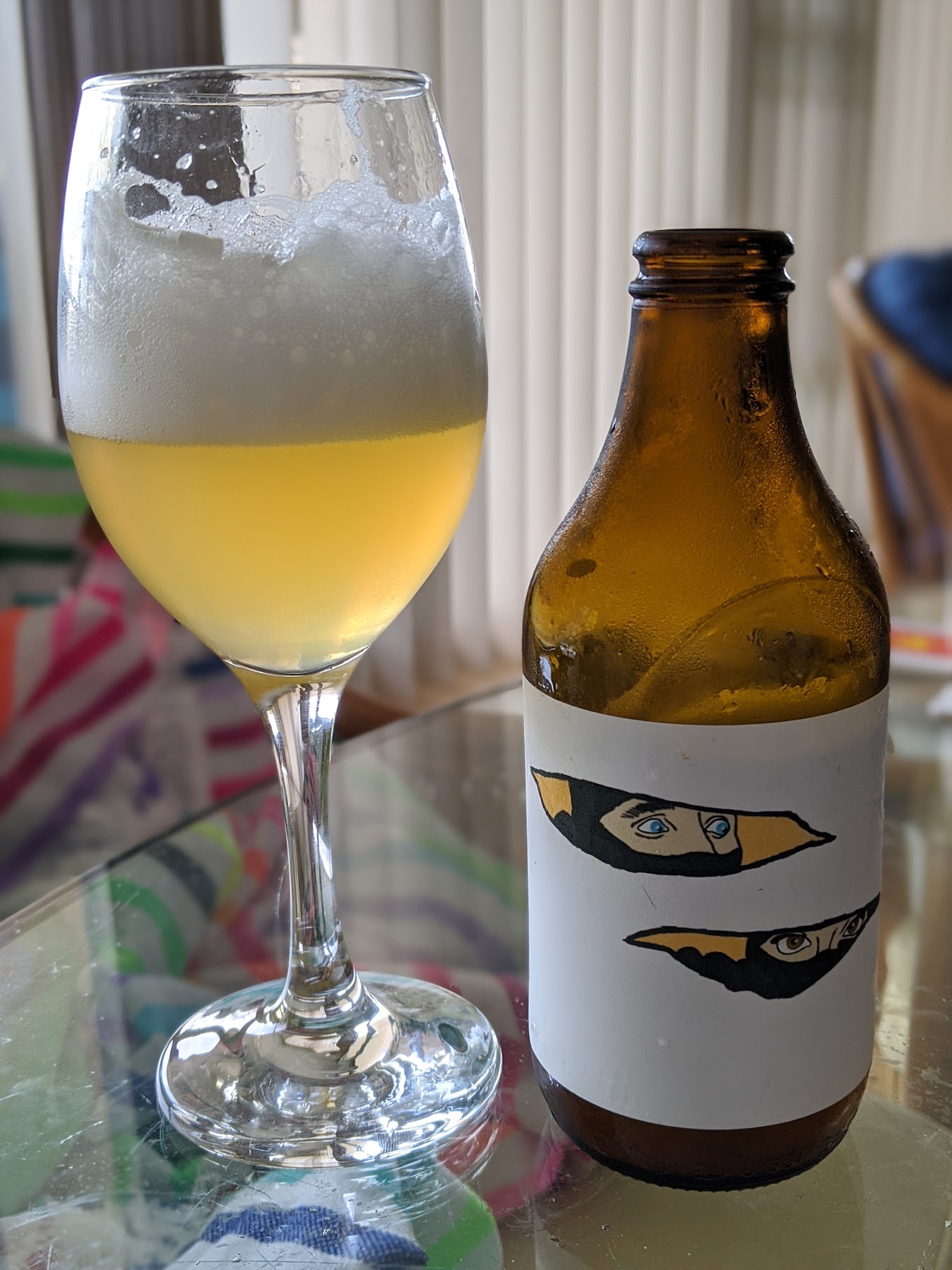 330ml squat brown bottle retrieved from the back of my beer cupboard, and probably unconscionably old. Best Before date (it has one!) is actually November 2019, so it's actually not as far out of date as I thought it might be. Anyway, here goes.

Pours with a huge frothy head, after some delicate adjustment, it settles down to a crackly, rolling cap that persists mostly as clumps of sticky lace. Body is light, very pale straw gold and surprisingly hazy. Carbonation looks quite fine given the exuberance of the head. Overall, it looks pretty good, and pretty alive for its age.

Nose is a bit muted, but it's surprisingly clear and crisp even so—there's a greenness to it which gives it the suggestion of hop brightness, even when I must dmit the hops are probably long gone. Under this is a very light, mild grain character, which actually comes across as more in the way of freshness again—again, it's surprisinlgy crisp for its age.

Taste is a bit lighter, and a bit sweeter, which is a shame. It could use more of that crispness here on the palate, where the back is a bit too much like non-alcoholic beer, with a cereal grain flatness. Otherwise, it's fairly clean through the middle, with suggestions of husk and hay.

Feel is light, and fuzzily carbonated. Seems pretty good to me. 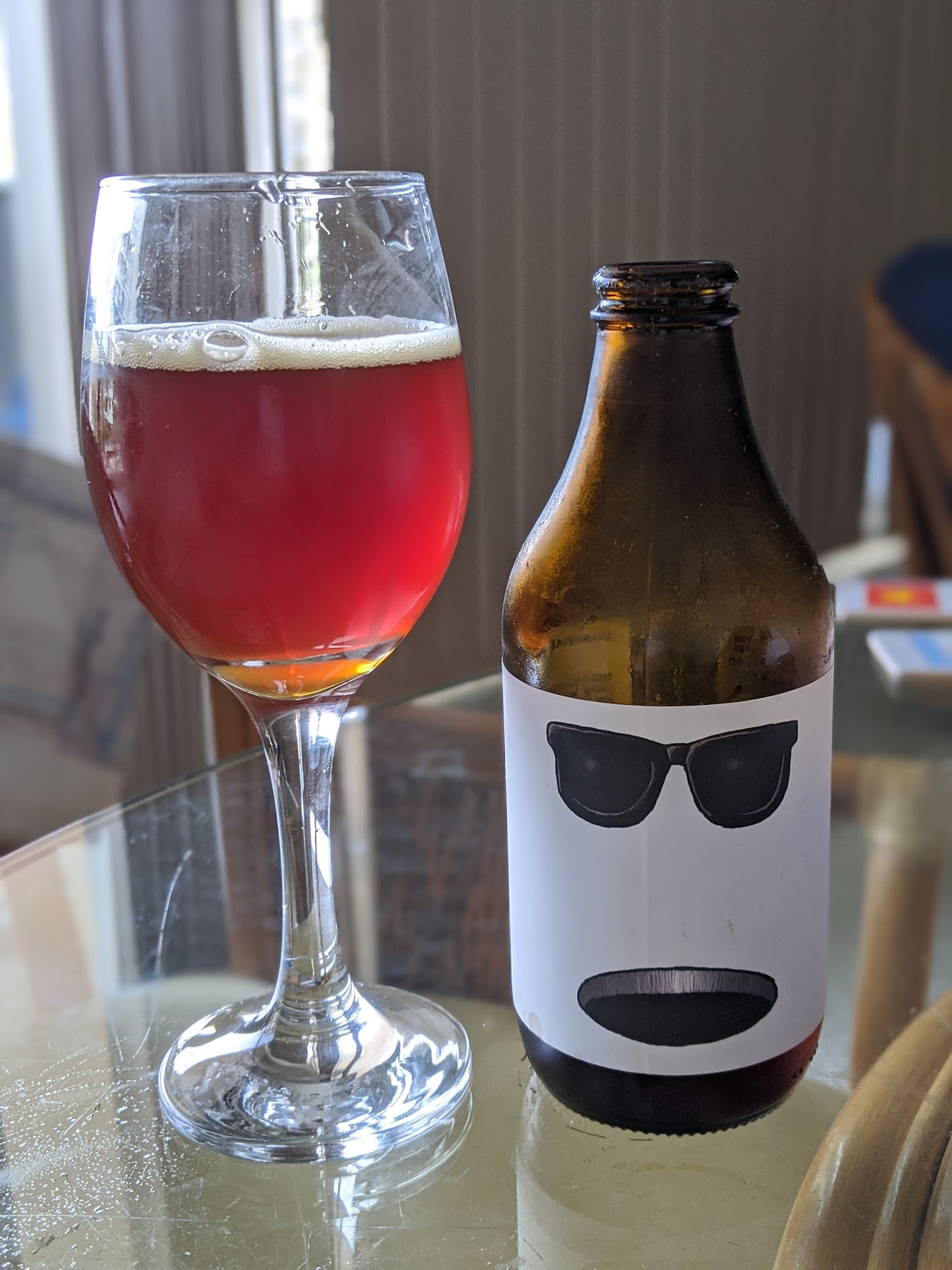 Squat 330ml bottle purchased from Slowbeer for me by Sam for Xmas. This is a coffee barleywine, apparently.

Pours a lovely russet red colour, with a minimal cap of off-white foam that sits as a fuzzy ring. No lacing. Carbonation is glorious though, swirling in huge waves and flurries as the glass is tilted, before slowly rising into the head. Body has some heft to it, that's for sure. Looks good.

Nose leans strongly on the coffee. It has brusque sharp tones that leave a coffee oiliness like you sometimes get in a coffee IPA—the beans actually add a lot of fruit to the mix. When this is combined with a firm, boozy malt character, it's actually rather lovely.

The taste is also pretty good, but it feels like a bit of a disappointment after the promise of the nose. Here, the whole palate is a little flat, from about midway onwards, meaning that the other flavour complexities are left to peter out. It starts strongly though, with more coffee aromatics, and a soft amalgam of molasses and port. Finish gives a suggestion of oxidation: it's lighter, with just an edge of the metallic to it.

Feel is again, a little too light on the back, but it's mostly soft, and matches the palate well.

Smells pineapplesque. Tart and zesty with some piquancy to it, aided by the wildness of the fermentation. Little sweet fruitiness, mostly tart. Slight acetic character which is duff but otherwise quite mild.

Taste is fairly sweet and pineapply upfront; develops some tartness which is not bad but then a more earthy and yeasty character late which is really not ideal. Just gets dry as well as a little cloying, taking on some of that pineapple character without it turning very fresh. It finishes fairly clean though, so it's just a passing Berliner bready note which I often find just because it's light bodied with yeast forward flavours. Not a great deal of character and its just a little unbalanced in the middle, but it's a decent mild sour.

Mouthfeel has a bit of sizzle on the middle but the body is otherwise fine. Light.

Bottle given to me by Jez at Christime. Tried on New Years Evetime in front of the 9PM fireworks (on TV, I'm a sad old man).

A lot of chunky sediment in the bottom of the glass; decanted it a bit, but some inevitably slipped through the cracks. Head is white, decent and foamy and leaves some nice lacing. Those chunks are off-putting, but looks like a good beer overall.

Smells fruity and pleasant. Distinct mango notes with some miscellaneous tropical characters around the edges. Some earthy rye spice behind it as well, giving a slight soil aroma, with some tepid vanilla character as well. Smells decent; a bit sweet and not sure it's balanced.

Tastes fairly good too. Starts off tangy upfront that develops some nice complexities towards the mid. Mango, peach, juicy tropical characters with a big fruit flesh kind of flavour. Slight booziness towards the end, and not a lot of bitterness but it's decently balanced where the rye spice comes through late, and the hops finish clean so the finish is intriguingly crisp, with a slight piquancy that's quite pleasant. That's really rather pleasant.

Mouthfeel is quite nice, too; it feels thin but without being so. Genuinely don't feel the 8%, it's cleaned up but also thinned out so it doesn't feel boozey or marshy.

Drinks surprisingly well; the chunks, the slightly monotonous fruit on the nose, put me offside at first but there's an intriguing spicy character blending with the big juicy fruit and it's a good combo. Enjoying this more and more as I go through it.
appearance: 3.5 | aroma: 3.5 | taste: 4.0 | feel: 4.25 | drinkability: 4.5