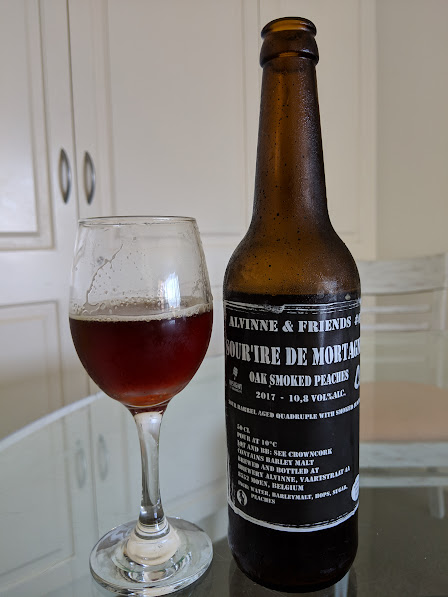 Sour quadrupel, brewed with oak-smoked peaches. Interesting idea. Purchased for me by Sam at some point, but it has been languishing at the back of my beer cupboard for at least a year.

Pours a reddish amber colour, perfectly suitable for a quad. Head is a fine film of off-white that leaves very intricate lace, and persists as a delicate ring. Body has a bit of weight, good clarity, and holds very fine carbonation. It's a good-looking beer.

Nose is immediately odd. The smokiness is most prominent, but with the acid, it has a slight medicinal quality to it, almost like peat. There's an underlying tartness that you can sense too—it's like strong aged balsamic vinegar, with more of a vinous bent to it. There's definitely barrel character as well, giving a smooth but semi-savoury edge.

Taste is really alien. It's acetic throughout, and this in fact probably becomes the noticeable backbone of the beer. The barrel is also prominent though, which does again beg the comparison to balsamic vinegar. It has a vegetative note throughout as well, which gives a kind of character like a pungent herb seed, and sweet with peach in the finish. Smoke is maybe slightly less on the fore here, but it's undeniable that the savoury note it imparts influences some of the other oddities.

Feel is slick, with a kind of very fine and light but frothy carbonation.

There's acidity, there's smoke, there's dense barrel-edged sweetness, and all of these characters feel like they're fighting each other. But it's hard to say—maybe it's just that I'm not used to the combination, and in reality they go together like an imperial stout goes with bourbon. It's certainly an odd beer.
appearance: 4.5 | aroma: 4.25 | taste: 3.75 | feel: 4.0 | drinkability: 3.5
Undressed
6.9% Oud Bruin from Picobrouwerij Alvinne / Den Bierzolder
Overall:
69 / 100
(Very Good) 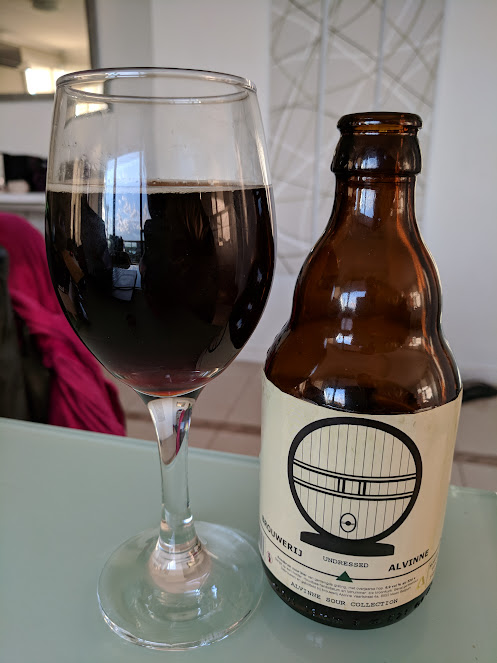 330ml squat Belgian bottle purchased as part of a bulk order with some workmates.

Pours a pleasant drip-coffee brown colour, with some slickness to the body which, combined with the colour, gives it an oily kind of look. Head only really subsists as a slight ring of off-white, although it's fed by fairly persistent carbonation. Looks pretty decent.

Nose is tart, and slightly vinous, especially the oak characters which come through quite strongly. But there's underlying characters from the malt giving a deep semi-savoury character like toasted rye bread. A hint of pepper comes through too, but this has mostly dissolved in the tartness once it warms up.

Taste is definitely tart, with a pronounced acetic character bringing comparisons to sharp balsamic vinegar. Lots of really biting acid, riproaringly sour, in fact, almost like chewing on aggressive citric acid candy. There's oak here too though, and while it doesn't soften the cutting quality of the acidity, it does broaden and deepen it to encompass more complexities. Towards the end, the acid almost takes on a peppery quality—a tingle of spice from the intensity.

It's definitely powerful, I'll give it that. In fact, I think this is one of the more strongly tart beers I've had—it has an aggression behind it that demands some respect. For me, that means it's a sipper, to be consumed only in moderation.
appearance: 3.5 | aroma: 3.75 | taste: 4.0 | feel: 3.75 | drinkability: 3.25
Wild West (Grape Edition)
6.0% American Wild Ale from Picobrouwerij Alvinne / Den Bierzolder
Overall:
63 / 100
(Solid) 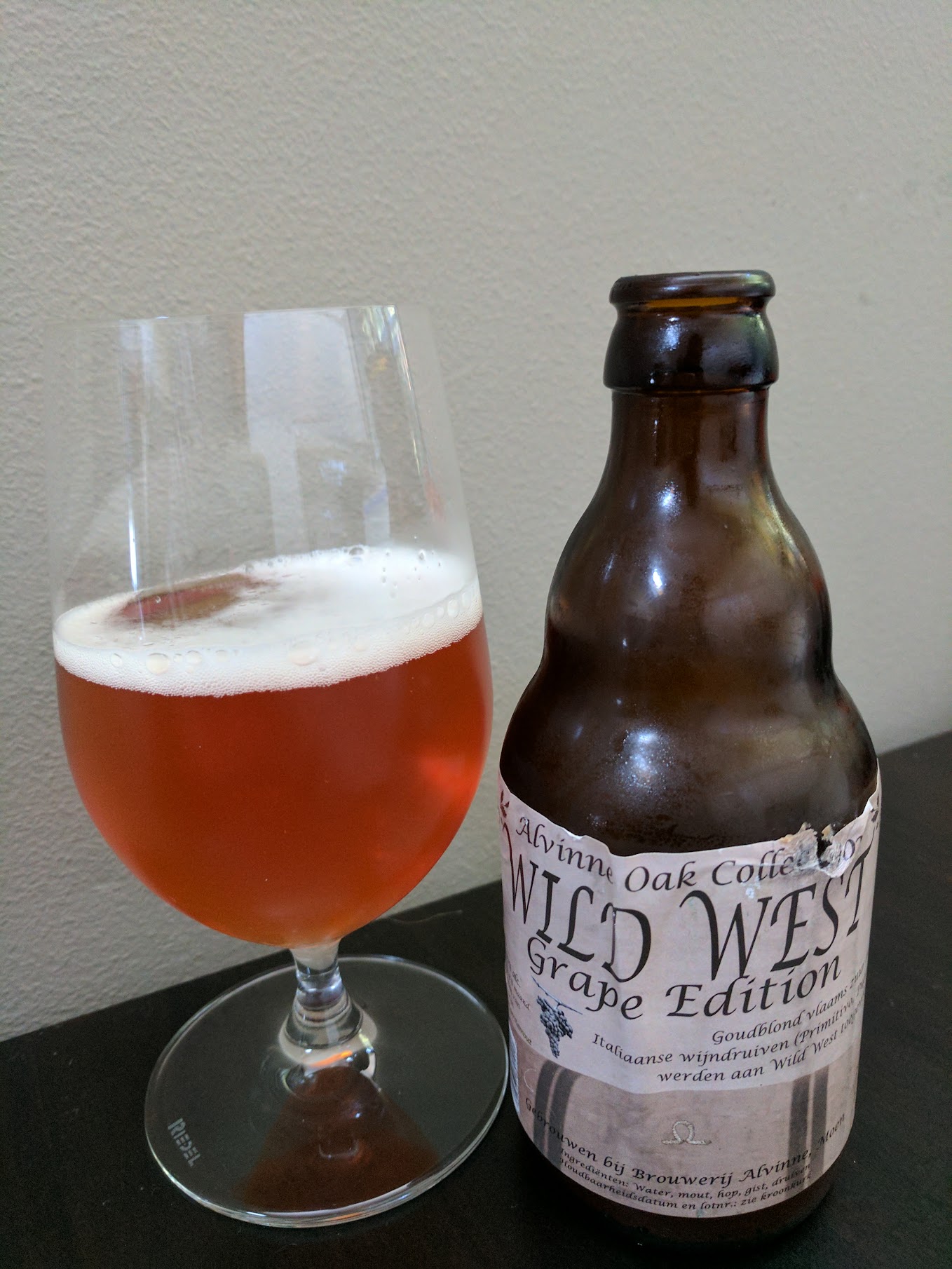 330ml squat Belgian bottle purchased as part of a bulk order with some workmates. Pours without the lees.

Pours a clear bronzed golden colour, with a fizzy head that settles out into a persistent fine off-white ring. Some very fine, but minimal lacing. Carbonation is rampant but very fine. Looks good.

Aroma is a little flat, and muted, but it has the trappings of a good sour. There's a sharp fizz of acid, and some underripe fruit characters—yes, perhaps even a little dry white wine grape. But there's also a rather pronounced metallic character, giving a coppery, oxidised twang. You can also smell the overt carbonation with a seltzer sparkle coming out.

Taste is a bit better though, mostly on the back, once the carbonation has cooled its jets. There, it's a subtle dryness, tempered with a mild riesling acidity. There's some fruit notes through the centre, but more metallic overtones as well. The front is kind of hard to feel due to the excessive carbonation, but I suspect it follows the same pleasant curves of the rest of the palate.

Overall, there are some things which really harm it, but it's a decent beer overall. The tartness is nicely created, and the grape addition adds a shape to the acidity. I suspect this bottle might not have been handled all that well, but I've had other beers from Alvinne via the same route that have been excellent. So it might just be a lesser variety.
appearance: 3.75 | aroma: 3.5 | taste: 3.75 | feel: 2.5 | drinkability: 3.5
Phi
10.0% American Wild Ale from Picobrouwerij Alvinne / Den Bierzolder
Overall:
76 / 100
(Excellent) 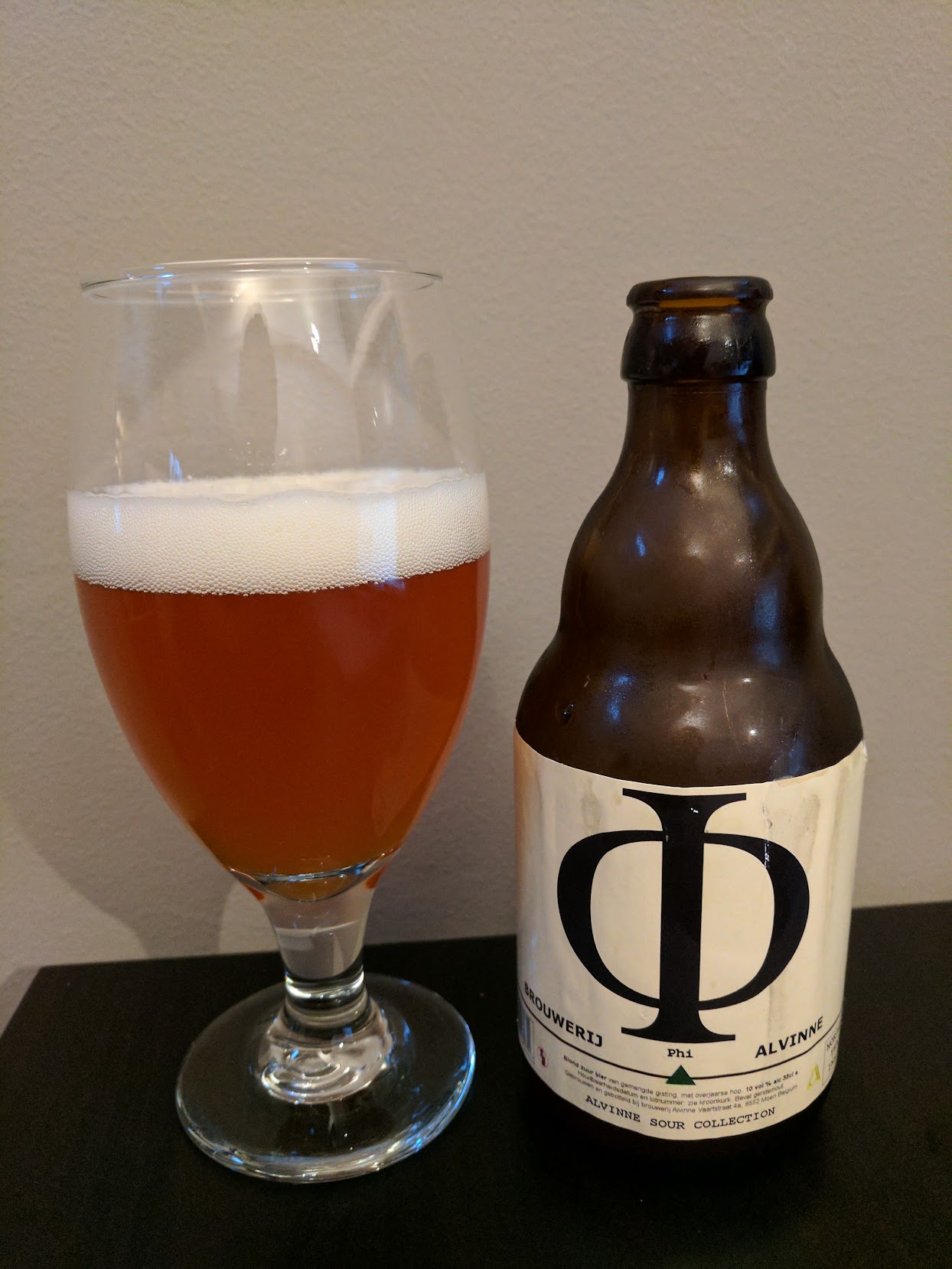 33cl squat Belgian bottle purchased as part of a bulk order with some work colleagues.

Pours a lightly hazed, bright golden colour, with a fully, rocky head of off-white. Carbonation is pronounced. Body has a little bit of slickness, but it's surprisingly light for the weight. Looks pretty good.

Taste is also very good. The extra booze here adds a richness and a length to the body, while the acidity stops it from being too full or too fatty. It has pleasant sweet vinous characters, like ripe, fruity grapes, mingled with a sharp carbonation that enlivens the palate. The earthiness is mostly gone, although there's a slight yeasty character in the finish. Again, it's good stuff.

Overall, this is a very nice beer, with a lot of pleasant characters to it. There are complexities to discover, and it's all wrapped up in a package that make the 10% ABV very passable and approachable. Good stuff.
appearance: 4.0 | aroma: 4.25 | taste: 4.0 | feel: 3.75 | drinkability: 4.0
Wild West (Blackthorn Edition)
6.0% American Wild Ale from Picobrouwerij Alvinne / Den Bierzolder
Overall:
71 / 100
(Very Good) 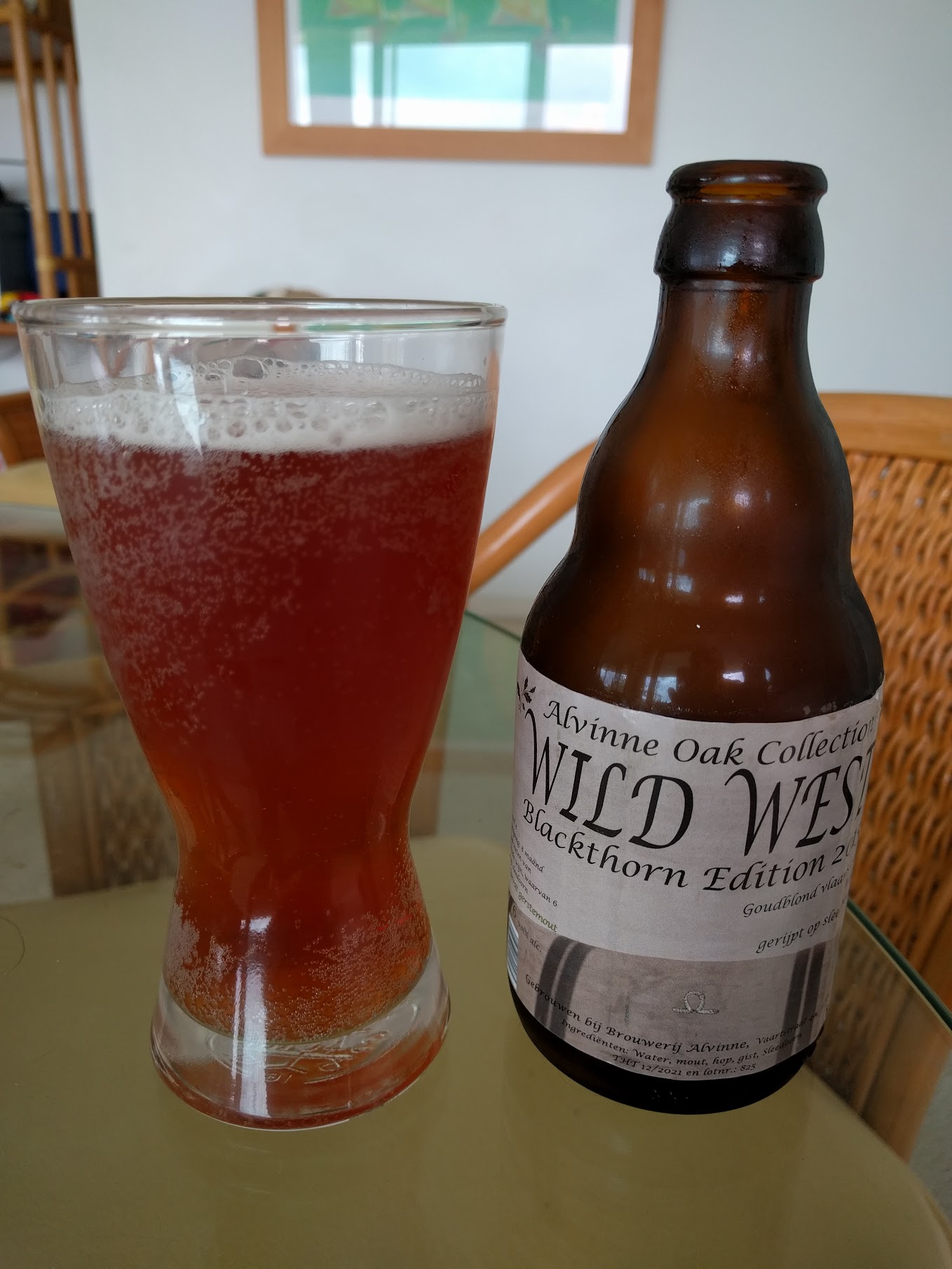 Pours a very hazy pink-tinged amber, like an old oxidised and unappealing bottle of rosé. Head forms a fine mesh of salmon-coloured foam. Some minor streaks of lace. Carbonation is fine, but the body is light. Looks decent enough.

Nose is quite tart, with a slight herbal berry quality from the sloe. There's not a vinoues quality to it, despite the oak aging though. Instead, it gets its complexity from those herbal, savoury qualities. It's an interesting twist.

Taste is pleasantly tart, with a true lambic-style acidity on the middle to the back of the palate. The sloeberries are less prominent here, although they provide a kind of encapsulating sweetness around the edges, which is internally blown apart by sharp acid. Finish is genuinely very tart, with a biting fruit acid character that really cuts.

Feel is actually quite slick, and it lacks carbonation, but makes up for it with sharpness.

Overall, it's not as wildly complex as a lot of other beers of its ilk, but the sloeberry addition is a surprising quirk to it, and it works quite well.
appearance: 3.5 | aroma: 3.75 | taste: 4.0 | feel: 3.75 | drinkability: 3.75
Mano Negra Chili Stout (Aged in Bordeaux Barrels)
10.0% American Imperial Stout from Picobrouwerij Alvinne / Den Bierzolder
Overall:
57 / 100
(Decent)
500ml brown bottle purchased from Slowbeer in Melbourne.

Pours a surprisingly thin and light brown, especially at the edges, where it looks a little watery and insipid. Head forms with reluctance on the pour, but soon settles out to almost nothing, leaving the beer looking quite still and dormant. Body does have some weight, but no viscosity to it. It's a bit unappealing all up.

Nose is quite interesting. Plenty of vinous notes, tending towards true acidity, with some undertones of raw chocolate and a floral fragrance that could come from the chilli. There are also some less-salubrious elements of bread dough and wet oak. It's not bad, but it's a little off-kilter.

Taste is very vinous, with tart cherry or underripe raspberries coming through, but linking to a rather vegetative character like snap-frozen green beans. Oak characters combine with a hint of acid and a bite from the chilli (which is mistakable and conflatable for booze), which all together form a suggestion of Bordeaux red. Slight peppery characters on the back, and a warming glow of chilli heat, nonetheless undermined by those slightly off vegetable notes.

Feel is surprisingly lightweight, especially towards the back, when it needs a bit more body to support the booze and the burn. In the finish, it almost has the character of being watered down, which is the last thing I expected from this beer.

Overall, I'm not a big fan, and it's a shame, because this beer had staggering potential. The idea is good, and some of the flavours are well-created. But there are things which really just send this flying awry, and in the end it feels like a missed opportunity.
appearance: 3.0 | aroma: 3.5 | taste: 3.25 | feel: 3.25 | drinkability: 3.25
Wild Undressed
5.2% American Wild Ale from Picobrouwerij Alvinne / Den Bierzolder
Overall:
73 / 100
(Very Good)
On tap at Tørst.

Smells tart and spicy. Plenty of red vinous notes with malt vinegar, black pepper and sour cherry. In the Belgian style of sours, very intriguing and refreshing too.

Taste is tart from start to finish. More vinous notes and plenty of sour cherry. Gets dry, peppery spice midway and then crisp sour vinegar notes late on the palate. Manages to finish with a sweetness, like fruit-infused vinegar. Makes it very drinkable and pleasant overall.

Pours a light but unassuming brown-red colour, with what seems to be a filmy, unadventurous head, that rapidly settles out into a fine crest of beige foam. Extremely powdery carbonation forms when tilted, leaving a slick film of lace wherever it goes. Although after a while the head dissipates, it's a very fine looking beer.

Nose is wondrously full of rich oak barrels, mingled with subtle vinous acidity. The body and depth lends some deep grain notes, hinting at chocolate and resiny bark. The acidity is never overdone, but it performs a duty in lightening the rest of the nose. Really lovely.

Taste is smooth and light, and very nicely balanced between the grain/malt sweetness that lends the hint of cocoa and chocolate, and the acidity, which leavens and crisps up the palate. Unfortunately, the acidity also flattens any potential complexity: leaving the beer smooth and consistent, but filtering out any oddities. Acidity ends up being rather acute, being strikingly dominant on the back.

Feel is very light, leaving a sharpness, but no real impression on the mouth.

Overall, I was a little disappointed with this brew. It had so much potential, but really slammed it hard with the acidity, steamrolling any true complexity or subtlety that might be there. While the elements themselves might be very pleasant, it fails somewhat as an overall package.