330ml brown bottle, rescued from the depths of my beer cupboard, I'm not at all sure where I got this one from—possibly from Sam as a birthday or Xmas gift. Inoculated with Brett, so I figure it's going to be interesting even (especially?) if it's very old.

Pours a bright, vibrant orange colour, with a very light haze to it, and a coarse-bubbled cap of off-white that sticks to the edge of the glass, but doesn't actually leave much lacing. Carbonation is a little overboard—it runs very swiftly through the body of the beer.

Nose is pleasant, and the Brett definitely gives a mild, sweet organic note to it. I get some clipped grass and turned earth, with sweet notes of coconut and a hint of rosewater. It's interesting, and nicely done.

Taste is lighter, which is maybe to be expected. It has a crisp, overly fizzy body to it, and almost no residual sweetness, aside from the phantom sweetness you get from the aromatics of the nose. There's a hint of something spicy like dried fruit soaked in brandy in the finish, but again it's very light.

I think this suffers from being so light in alcohol. It makes it feel thin and fizzy once the Brett has really taken hold, and the dryness to it doesn't allow some of the more delicate flavours to expose themselves.
appearance: 3.75 | aroma: 4.0 | taste: 3.0 | feel: 2.5 | drinkability: 3.25
Lux Mundi
5.8% Patersbier from Save The World Brewing Company
Overall:
45 / 100
(Not Great) 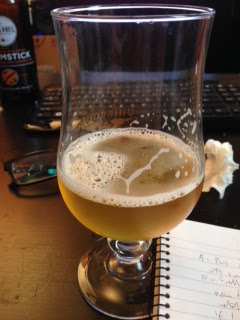 Pours a pale gold, cloud of largeish bubbles for head. Revives nicely when swilled. Lacing is mediocre, but there. Looks quite nice.

Smells a bit funky and off at first, but then just grainy, with puffed rice, cereal and vanilla muesli. Green apple too and a touch of organic barnyard but yeah, surprising load of grain dump on that.

Decent body, has some texture in the middle. Not much movement though, it's thick on the back and the front.

22oz brown bomber purchased from WhichCraft in Austin. Brought back to Sydney, where I shared it with Sam and Rich. This is my first "patersbier", although I'm almost positive this in no way actually qualifies as such from a Trappist standpoint.

Pours a very pale golden colour, quite clear, and quite light. Carbonation is very fine though, and it sits softly in the glass despite the fine, light-weight body. Head is a coarse web of white, that leaves a few specks of lacing as it's tilted. It looks decent enough all up.

Nose is very rounded and Belgian in style, with some bready notes from the heavy usage of light malts. Still, aside from this are some pleasant grape tones, some spice and dried fruit and a little hint of acidity. There's even a suggestion of lemon peel or something sharper. And on top of all of this, it's pretty robust and forthright, so there's certainly a lot to be said for it.

Taste is a little bit lighter, and falls more towards a pretty generic Belgian pale, or even towards a Euro lager. Light, slightly clinging grain notes give it a bit of organic funk, while the yeast leaves it rather dry. It's actually reasonable pleasant all up. It's not big, but it has some likeable qualities in what's a reasonable clean beer.

It's certainly not bad—in fact, there's a pleasant quaffable quality about it that works quite well, and I very much like that it manages to stay fairly true to its Belgian roots while also being very approachable. If it lacks some complexity, that's maybe because it's meant to lack some complexity. Certainly, the style is probably meant for general drinking, and not as a shining beacon of the Trappist brewers' art.
appearance: 3.5 | aroma: 3.75 | taste: 3.5 | feel: 3.5 | drinkability: 4.0